THE FIRST ONE THIS FALL 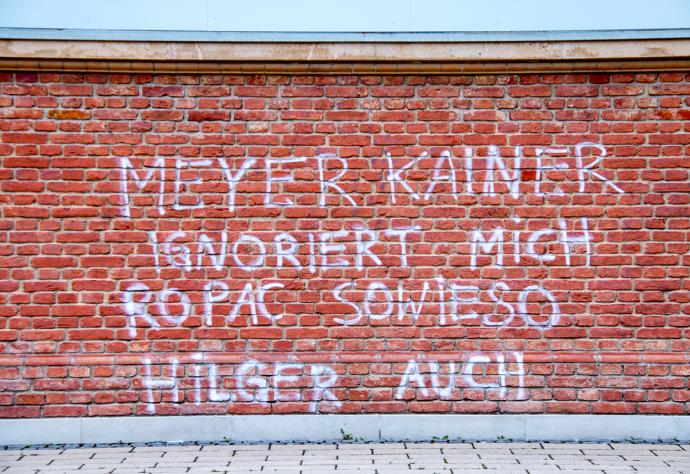 Anonymous, Graffiti on the outer wall of Marx Halle, 2015

This Autumn Vienna hosts two international art fairs within a space of two weeks. The old team of Vienna Fair, under the artistic direction of Christina Steinbrecher-Pfandt, changed the name to viennacontemporary and moved the fair’s location to the historic Marx Halle in Vienna's 3rd district. Since its inception in Spring 2005, the art fair never had a fix date. This was a major obstacle that prevented it to grow and become a real player on the international art market. Although there is a risk of losing the 10 years of brand recognition, Steinbrecher-Pfandt and her team were willing to take it. With a fixed date in September the viennacontemporary needn't compete with Frieze or FIAC for exhibitors and visitors. Hopefully, it will not have to compete with the new Vianna Fair that takes place in October. 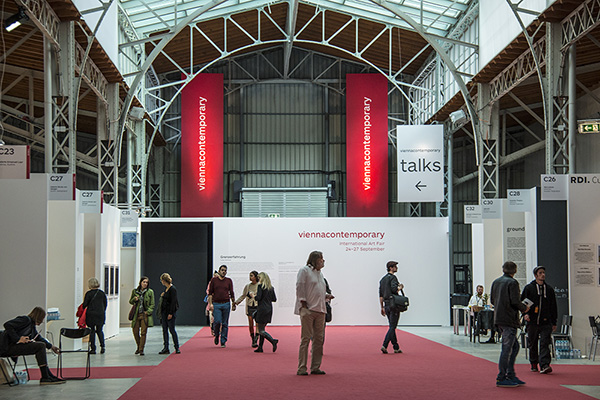 While the Marx Halle is not yet a popular location in Vienna, it is a bigger space "that feels just right," to quote the fair’s artistic director. Already entering one cannot help but notice how spacious this setting is - a key element to a successful presentation of art. With its historic cast-iron construction and beams of light entering at different angles Marx Halle makes undoubtedly a perfect place for this kind of event. 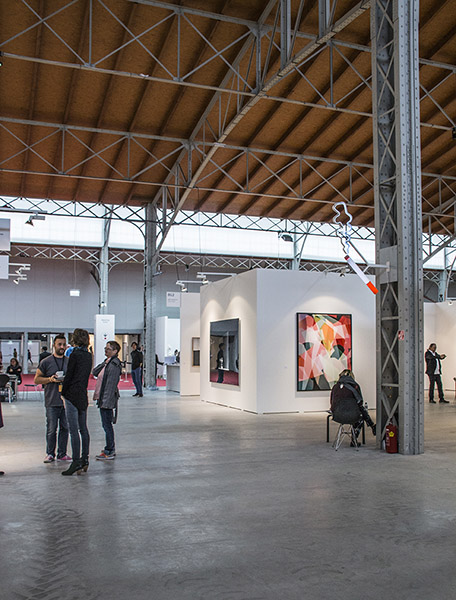 Of the 99 exhibiting galleries, 25 are for the first time at the fair. One of these, the Martin Asbæk Gallery from Denmark, won the price of the Austrian Chamber of Commerce for the best international booth design while the national price went to Unttld Gallery.

“I was very surprised,"  says Martin Asbæk laughing jovially, "the announcement was made in German and as I don't speak the language, I don’t really know why we won”. His gallery is showing works of a young Danish artist, Sofie Bird Møller. 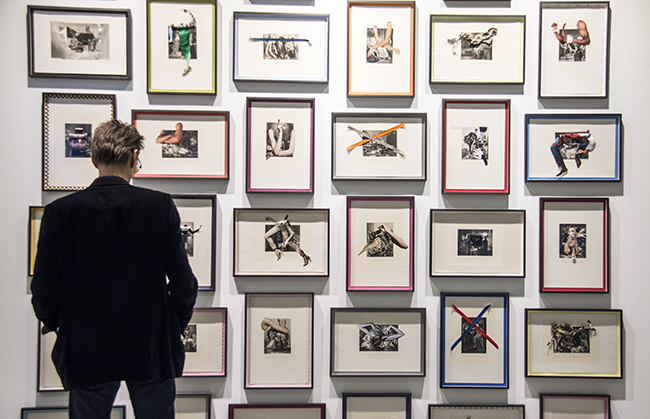 Møller modifies existing images such as steel etchings, fashion photos, advertisements and film footage transforming their original function or narration. In a new series, presented at the fair, the artist uses 36 old etchings of the Shakespearian plays, combined with colourful, tacky wallpapers and various cut-outs from fashion magazines. The added elements are crumpled or folded on top of the older pictures obscuring large parts of the original image creating new mysterious forms. The gallery also shows 4 images from her well know series Interferences, in which the artists paints over the fashion magazine pages. With thick streaks of paint applied in highly concentrated strokes she transforms the models on these photographs into abstract forms. In her video work Catch Me If You Can the artist edited together six black-and-white films from 1933-51, removing the main characters, but leaving their movements visible. 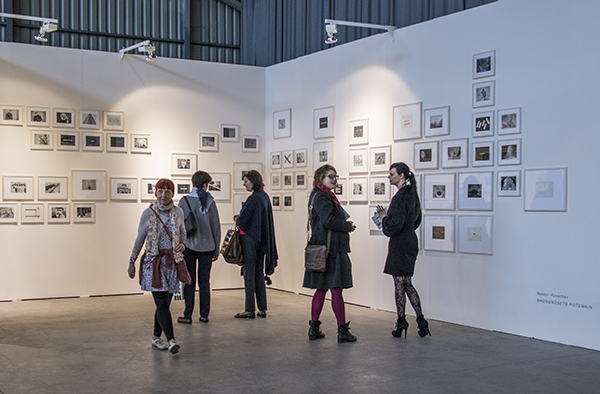 Heike Curze Gallery takes advantage of this year’s country focus showing works by a young Bulgarian artist, Nestor Kovachev. A conceptual series of 98 drawings on the subject of the silent film Battleship Potemkin is the major part of the presentation. All the drawings are of the same size -15 x 21 cm- and technique -Nero pencil- giving a systematic touch to Kovachev’s work, which he calls, "conceptual drawing series". The drawings are grouped together into 5 sections following the 5 acts of the film, although some elements of the plotline and the ending are changed. While inspired by the visual mastery of the Eisenstein's film Kovachev often uses text images, citing the style of the movie, to keep the narrative going. On the other hand, he regularly breaks the narrative by introducing geometric patterns, referencing constructivism, to balance the work. This series is Kovachev's third movie interpretation after Pablo Pasolini’s Uccellacci e Uccellini and Binka Zhelyazkov’s The Tied Up Balloon. 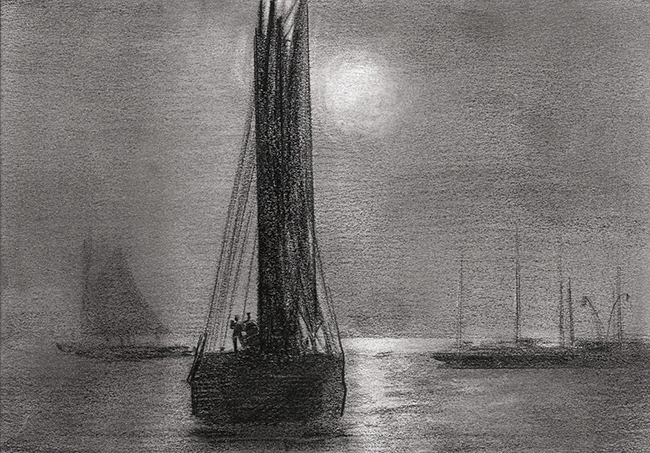 Nestor Kovachev - Detail from the Series of 98 drawings Battleship Potemkin, 2014

Even though the fair is mostly about the business of buying and selling the exhibition aspect is extremely important. This is reflected in other formats throughout the viennacontemporary such as Reflections, Estanlished & Young and Zone 1. The format Reflections concentrates of the curatorial aspect of gallery work. Especially, for those with small booths or many artists it is an excellent structure to put the works into context and create an exhibition in itself. Established & Young is a category for contemporary art galleries established before and after 2010, respectively. In Zone 1, 12 galleries present solo exhibitions by young artists. Our attention was drawn to the show of paintings and objects by a young Austrian artist -Dominik Louda- at the KEG Gallery. 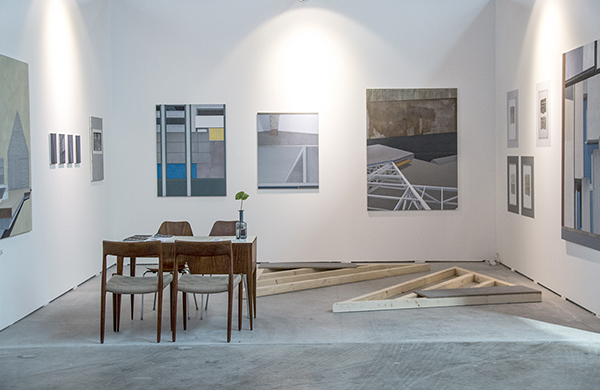 Parts of the floor of the gallery are taken by wooden triangles, made of beams and planks reminiscent of construction elements often seen on building sites.  Also in his paintings Louda merges different architectural elements, which, viewed separately, follow principles of central perspective but combined together, elude the viewer creating impossible multi-dimensional spaces. Louda is interested in those small changes of perspective that throw us off like a sink that is couple of centimetres too low or a counter that is just slightly too high. This irritation of the way we perceive our surroundings, especially those man made, are the central theme of his work. 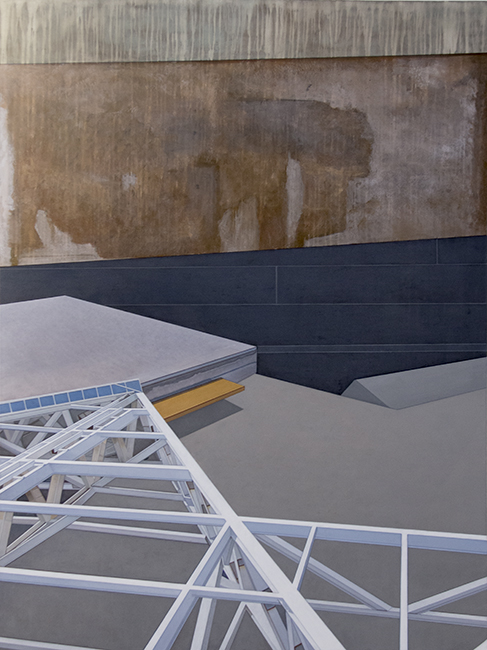 Along with its different presentation formats viennacontemporary offers a broad spectrum of framework program and events, such as talks and discussions; guided tours, or educational program for children and those young at heart. The fair is definitely well worth a visit and a great place to spend a rainy day on Sunday. 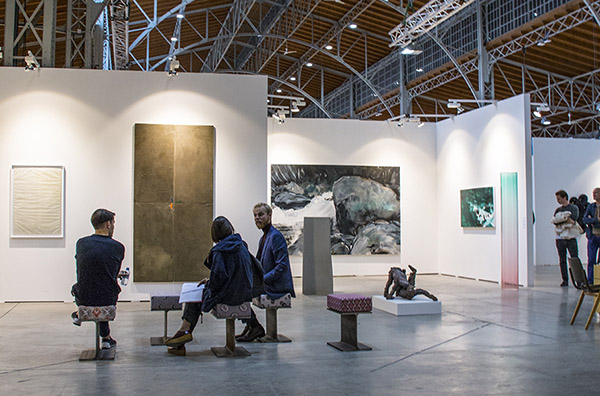