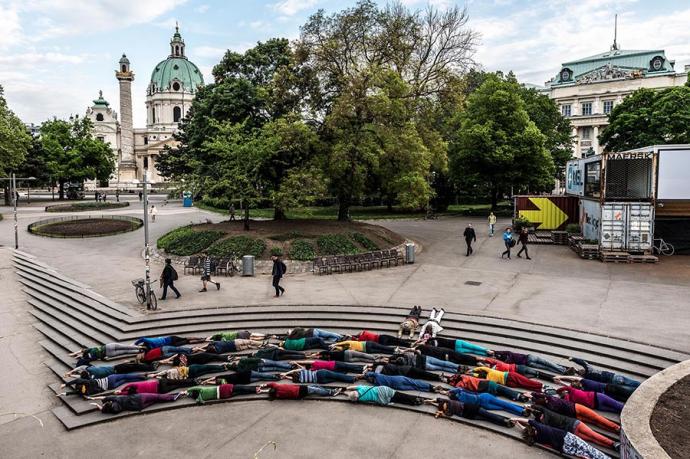 The Vienna Biennale 2015 is the first event of its kind to combine art, design, and architecture. With cross-institutional co-operation, numerous exhibitions and projects, interventions and performances in public space the Vienna Biennale strives to find ideas to help improve the world.
Peter Weibel - an artist, theorist and curator - was invited to co-curate 2 exhibitions at the biennale: “Mapping Bucharest: Art, Memory, and Revolution 1916–2016” and “Performing Public Art.” He tells us why he thinks Vienna needs a biennale, what lessons should we learn from the past and how performative acts turn public space into a place, where direct democracy can be exercised.

Peter Weibel: Maybe the gene is selfish (see The Selfish Gene by Richard Dawkins, 1976), but man is more than the sum of his genes. He has empathy and he does not feel well in a world in which other people don't feel well either. Looking around yourself, you have the choice to participate in the construction of the world and to improve it in a way so that more people can benefit happily from their environment. Or you say, I am happy with the state of the world, with my position in the world, and I don't care about the position of other people. But a human being cares and takes the option no. 1. This is the difference between animal and man.
With an exhibition, you can change the perception of visitors and people. Perception means in Greek aísthēsis. From aísthēsis comes our word aesthetics, perception. Art is about perception, changing the perception. The Vienna Biennale 2015 has the subtitle, “Ideas for Change”. Therefore my two exhibitions, in cooperation with Bärbel Vischer from the MAK and Gerald Bast, Dean of the University of Applied Arts, Vienna, are completely in line with the aims of the Biennale, which is about change. Changing the perception and the view of the world is the first step towards changing the world itself.

One of the major exhibitions at this year’s Biennale is “Mapping Bucharest.” Why Bucharest?

PW: Bucharest is an example of how in this world things have become impoverished, for example, during the period of Nicolae Ceaușescu. We always have to differentiate between people and politicians, as well as people and the government. The occupation of Romania by the Communist party under Ceaușescu did a lot of harm to a great nation of culture. And it is a shame that the Western World accepted this dictatorship by strategic ideas concerning Russia. In fact, losing Romania and other Eastern European countries as partners of the West, was like an auto-amputation. Eastern Europe was amputated by the communist authoritarian regime, but we forget that we have also been amputated of our brothers and sisters in the East in the same way. And this is why I make this exhibition: to bring Bucharest and Romania back on the map of European culture, where it always has been, with wonderful contributions to the most important avant-garde movements of Europe. Romanian artists participated in almost all important art movements throughout Europe as founders, co-founders, and central figures. Just to name a few: Constantin Brancusi is the founding father of modern sculpture, three of the leading Dadaists in Zurich 1916 were Romanians, Tristan Tzara, Arthur Segal, and Marcel Janco. In 1941, Gellu Naum, Gherasim Luca, Dolfi Trost, Virgil Teodorescu, and Paul Paun teamed up in Bucharest and formed the Romanian Surrealist movement, including Victor Brauner and Benjamin Fondane. The group's activity, particularly intense between 1945 and 1948, made André Breton say: »The center of the world has moved to Bucharest«. The Romanian princess, Anna de Noailles, lyric poet and friend of Marcel Proust, etc., supported the surrealist films of Luis Bunuel and Salvatore Dalì. Isidore Isou is the founding father of Lettrism, out of which Guy Debord formed the splinter group of the Situationist International. Eugène Ionesco, one of the foremost figures of the French avant-garde theatre, the Absurd Theatre, is Romanian, as is Emil Cioran, the nihilist author. Also famous are the experimental writer Oskar Pastior and Nobel Prize winner Herta Müller. After the war, the influence of Romania on the avant-garde continued. Daniel Spoerri was one of the co-founders of Nouveau Realisme, André Cadere of Conceptual Painting. The photographer and filmmaker, Eli Lotar, could be seen as the beginning of the new Romanian film wave, which at the moment is the best among Mexico and Korea: Radu Jude, Cristi Puiu, Christian Mungiu, Corneliu Porumboiu, Marian Crișan, Radu Muntean, and Andrei Ujica. As a city, Bucharest is a metropolis of modern architecture: see Romanian Modernism: The Architecture of Bucharest, 1920–1940 (MIT Press). Even humanities scholars like Mircea Eliade and Serge Moscovici have made important contributions through a transfer of ideas from the East to the West. This abbreviated art history is precisely an example of how everybody can create his or her own Bucharest: inhabitants and visitors. The most important part in this process is the participation of everybody.

What is the concept behind the Performing Public Art Project festival?

PW: A public space can be seen as a place of visual pleasure accessible to everybody, for example, a public garden or an open space with sculptures. A public place can also be a place for encounters, meetings, and discussions, like a restaurant or a café. And a public space can be an agora, a public sphere, where people express their opinions. Recently, places in Istanbul, Cairo, Beijing, Stuttgart, and Kiev, like Tahir Square, Majdan, Taksim Square, etc., have become famous because people met there and expressed their political opinion through demonstrations and occupations of the public space. In these cases, when citizens acted politically in a public place, I would call the public place performative. The theory of performance was founded by the philosopher J. L. Austin with his book, How to Do Things With Words (1955/1962). To change the world with words was the monopoly of priests, judges, and politicians in the speech act theory. Now the citizens will also change the world through their actions. They are doing performative acts in a public space. Therefore, I got the idea that static sculptures and monuments as expressions for art had become a little bit obsolete compared to the activities in the public sphere.

How did you choose the participating artists? Is there a "fil rouge" between the pieces or does each performance "stand as an autonomous dynamic sculpture"?

PW: My co-curator, Gerald Bust, and me kept on looking for artists who have been inspired by these public civil movements and have developed their own way of public performances in public space. There is a fil rouge between the pieces. The whole range of political culture, like repression from the side of power and complaint from the side of the public, forgetting from the side of power and reawakening from the side of the public are subjects of the artists' activities. To show that public art has changed over the last decade through global activism and the wide echo that this activism has found in advanced art is the mission statement of the project: performing public art.

It appears that the past plays a major role in both of the exhibitions that you have curated for the Biennale of Vienna. Do you think we can find answers for the future in the past? What kind of answers are you interested in?

PW: We can learn something from a joke about the function of memory. There is this German-Austrian proverb about »the snow of yesterday«, meaning the snow has melted and has no effect anymore. But the joke of Bazon Brock says that »the snow of yesterday is the avalanche of tomorrow«. This happened precisely in the economy: the credits of yesterday created the economic bubble of today. The credit system was really the avalanche that dragged the economic system into the abyss. The past created the problems of today. The Yalta Conference (1945) divided Europe into East and West with the »Iron Curtain« (an expression coined by Winston Churchill on March 5, 1946): »From Stettin in the Baltic to Trieste in the Adriatic, an Iron Curtain has descended across the continent. Behind that line lie all the capitals of the ancient states of Central and Eastern Europe: Warsaw, Berlin, Prague, Vienna, Budapest, Belgrade, Bucharest and Sofia. All these famous cities and the populations around them lie in what I must call the Soviet sphere, and all are subject, in one form or another, not only to Soviet influence, but to a very high and in some cases increasing measure of control from Moscow.«
We see a decision which was made in 1945 and destroyed Europe for half a century. This is the importance of the past. Now we have to look for answers to how we can take care of the future. Here the most important question is whether the present shape of the European Union is a guarantee for a future of a democratic Europe or whether it tosses Europe into the arms of right-wing populist regimes. What my exhibitions want to support is the idea that a confluence of cultures (and not a Clash of Civilizations, P. H. Huntington, 1996) is of paramount importance for the future of a democratic Europe.

Would you like to involve the broader public in generating ideas for change? If yes, what strategies for social engagement would you postulate?

PW: At the Boston Tea Party in 1773, people claimed »no taxation without representation!«
People told the British colonizers »We won't pay taxes if we aren't represented in the parliament.« With this statement and action, the American War of Independence started. Today people demand: »No taxation without participation!« People want a performative democracy in which they do not only vote and delegate, but also decide and participate. This is one of the ideas for change and for social engagement.

Do we need another Biennale? What do you find interesting in this format?

PW: As the word biennale says, it should happen every second year. Twenty years ago, we only had a half a dozen biennials, from Paris to Venice. Today we have about 130 biennials worldwide because the cartography of culture has expanded in the age of globalization and digitalization. To stay on the global map, Vienna needs a biennale to cope in a global competition.