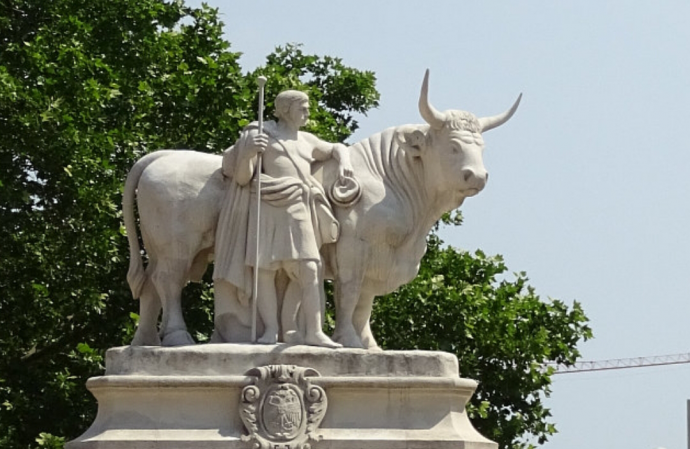 Whenever I am not busy with my exhausting full time job of partying and gossiping with the rich and the powerful, I take care to wind down and relax and enjoy the beauty of my main home base, the city of Vienna.

Recently I purchased a little book called "Wien geht". Since my brain sometimes works in mysterious ways, I first thought that title wants to say: "Wien? Na ja...geht so". Which would have been an unusual, but endearing way to advertise both a city and a book, and therefore piqued my interest. But of course it simply means "gehen" as in „walking“. The book offers 40 different suggestions for longer walks within the city, with little maps and descriptions, mostly away from the well-known and crowded tourist attractions, and they are supposed to offer new sights and insights even for people who live in Vienna. As annoying as the idea of new sights and insights sound to an old cynic like me, not to mention the idea of taking long walks, I decided to pick one of those tours randomly and walk it.

As it turns out, walk no. 22 starts from Kardinal-Nagl-Platz in the 3rd district and requires you to walk in weird serpentine lines towards Hauptbahnhof, taking you through several new urban development areas, which are supposedly the main point of interest here. This is indeed a part of Vienna I've never before had any reason to visit. And now I don't have a reason to ever visit it again.

I'm sure lots of experts in the fields of architecture and urban planning had (or still have) lots of clever words to say about these buildings and developments. For me, by far the most interesting thing about them were their names.

The first shiny new thing on the tour is the "Triiiple Tower" (Yes, spelt with three "i"s. Presumably an adult person had this idea, and other adult people approved this idea). When I read the name Triiple Tower in the description, I was hoping for a building with three towers, which might have looked exciting. But it's just three identical high rises in proximity to each other. (I would have gone with "Skyyyscrapers".) Next is a slightly elevated little city-within-the-city, with bank and supermarket and everything, called "TownTown". It should be noted that repeating the word "town" does not make buildings look more metropolitan. The map then sends you through a completely unremarkable small park that the book calls a "Stadtwildnis" - probably because a you have to fight yourself through some bushes to get to the other side, due to construction work and closed gates. Then there's "Stiertor St. Marx" - not a new development, but an actual old gate with two statues of bulls, which used to mark the entrance to the cattle market, as the book informs us. It's the clear highlight of this walk, because those bulls look so absurdly proud standing there with no function, like someone just forgot to tear them down and replace them with a building called "Doppelstier", or more likely "StierStier". After changing direction and working your way up a hill along a street with heavy traffic in the searingly hot sun, you catch glimpses of yet more recently erected residential buildings with the name "Eurogate". (I don't really know what's behind that name, and maybe it was the heat on that day, but I was sure there was a scandal involved and the name is a reference to Watergate. Many Euros must have gone through the hands of criminals.)

If you have made it this far, you can change direction again and follow the map past the museum of military history, and through a surely much lovelier park (confusingly called Schweizer Garten, like the huge restaurant in Prater) to Hauptbahnhof. Or you can, like me, forget you have a map and a phone with you, have a moment of "What am I doing here? Where am I? WHO am I?", get lost on some street somewhere between Arsenal and Belvedere and drink lots of spritzers in the next Gasthaus you see.

While drinking, I had to think about the complaints some people make about there being „too many tourists“ in always the same places, as if those people have never been tourists themselves. In theory, I very much approve of the concept of walking off the beaten paths, of deliberately choosing less widely known places to see. But it occurred to me that there is a reason for tourist attractions, like Schönbrunn for example, being called that: it is because they are attractive. When you stand in the centre of Schlosspark Schönbrunn, the view is breathtakingly beautiful. When you stand in the centre of TownTown, on the other hand, it is not a big deal if you, like me, have neglected to put in your contact lenses before you started your walk.

But I am not ready to get rid of the book after doing just one – well, almost one - of the forty "Wien geht" walks. What do you say? Should I do more walks and report about them here?

With hugs and kisses,