Face to face with one of Vienna’s invisible inhabitants
April 23, 2016 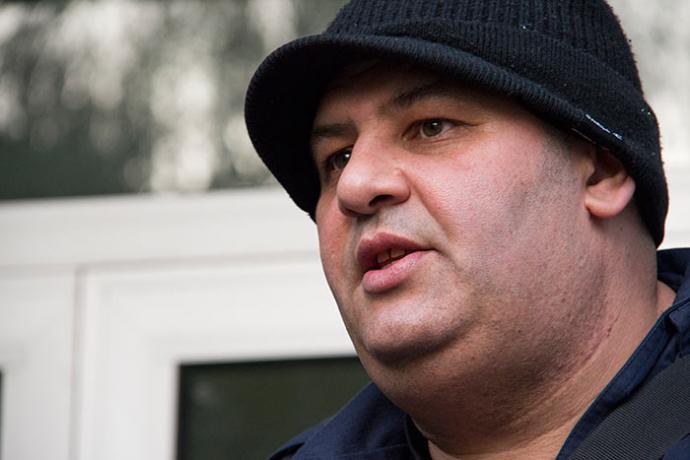 Trying on guided tours is a lot like a game of Russian roulette: the anticipation is thrilling and once it ends, you are either elated about having taken part in it or virtually brain dead from being bombarded with repetitive and redundant information. This month, the team of WhenWhereWh.at participated in a tour guided by Robert, one of the homeless individuals training in the social program known as SUPERTRAMPS in. This tour is unique because it reveals a virtually invisible side of the city, or in any case, one that hardly anyone wants to see: homelessness.

A spot where Robert lived for 6 months. Photo by Ewa Stern

Our tour guide, Robert, a trained violin maker, has been living on the streets for a while, has changed shelters a number of times and literally lived on the side of the road for half a year. At the time he met a journalist who lived across the street from where he slept and is familiar with the situation of the homeless in Vienna through a report he produced not long ago. The man brought hope into Robert’s life by inviting him home to take showers and eat with his family. It helped our guide to see the light at the end of the tunnel and actively look for ways in which he could get back into the society. This road however is not an easy ride. Originally from Hungary Robert is not entitled to any form of social security nor health services. Not having a stable residence also hinders his job search. Even though he is fluent in 3 languages, the only employment he can hope for is mindless physical work paid under the table and often less than initially agreed upon. If he protests he is warned to take it or leave as his employers know he has no way to pursue justice. 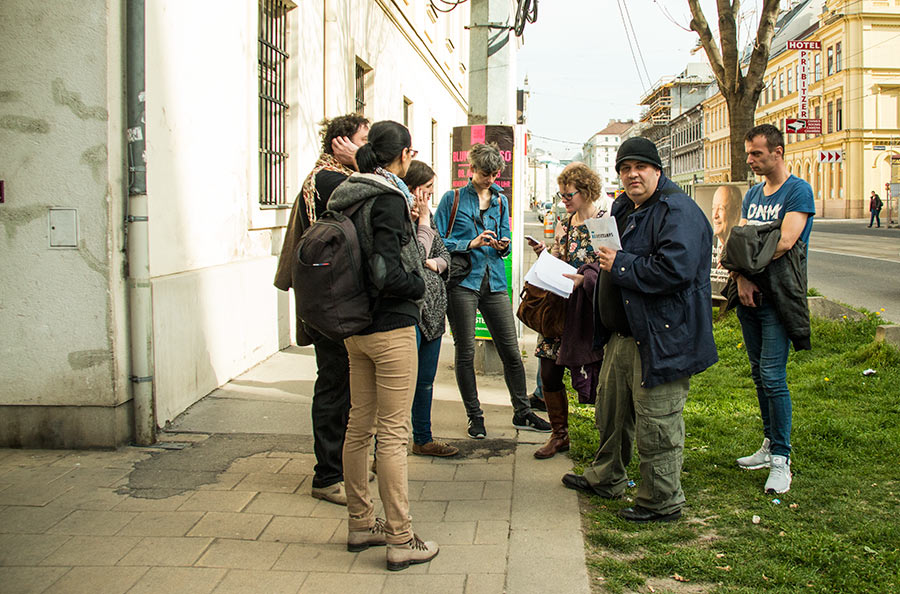 Meeting place in Vienna's 3rd Dustrict where Robert spends most of his time. Photo by Ewa Stern

Robert’s tour is not only about the buildings and places, experienced differently by the homeless and the more privileged on the streets of Vienna, but about the streets themselves. The stories that he shares with his audience are not the type that make one comfortable; they are about the places we choose not to see on our way to work, shopping or a date. Robert tells of places like a man-size den by the side of the street covered by the overgrown branches of nearby trees, a patch of land in the middle of the city inhabited by strangers united in their predicament and a shelter for the homeless where the homeless are not really safe. There is also a supermarket where Robert approaches people and begs for food so he does not have to resort to stealing. 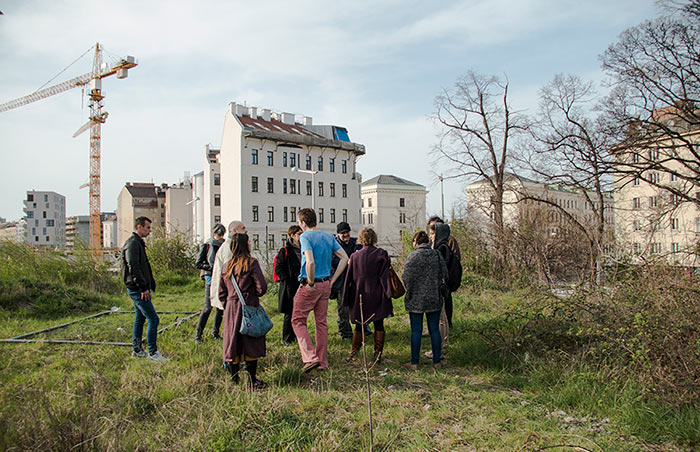 It is through tours like these that individuals such as Robert manage to escape the vicious cycle that cripples them and makes sure that they remain on the outskirts of civilization, generating at best sympathetic looks and a clear conscience for having given a random man or woman your change from the supermarket. Our guide is curious – he wants to know how we would feel having to beg for money and how we might approach others. How close is close enough for a person who asks you for cash, food, or plain help? Robert posses strong opinions about the state of society – why should homeless people have to pay for using public transport when all their possessions probably do not even add up to the price of a train ticket? For him, class differences are very real and made even more so by shoppers’ generosity towards the homeless. Ironically, wealthier individuals who prefer the Merkur supermarkets usually ignore him, as opposed to those who shop at the Penny, a cheap food chain store, and have more than once offered to buy him food. Most of all, our guide is eager to share with us his thoughts and life experience: how he ended up on the streets in the first place, what he would have done differently, why here and not somewhere else and how he plans to get out of his predicament.

Beyond the flâneur factor, such tours incorporate a voyeuristic experience – that of witnessing the most intimate situations in some people’s lives simply because their private sphere does not incorporate the traditional four walls and a roof above their heads. Instead, it is part of the public space. Back in the 60s, this was the definition of freedom. Now, it is a cry for help. 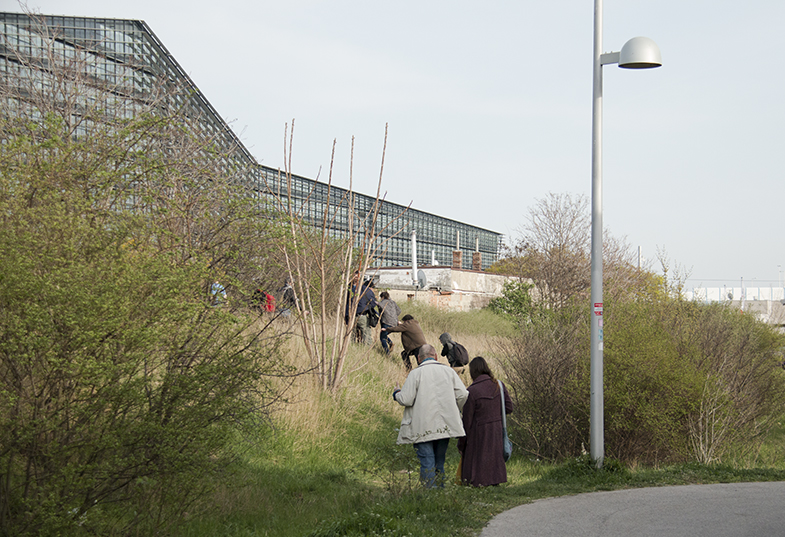 The organisation that makes Robert’s tour possible is SUPERTRAMPS, representing, in the words of coordinator Valerie Kattenfeld, a “social business” that aims to help reintroduce and reinstate homeless people in society. In light of this, the whole experience is understandably very personal for the participants as well as the guides and their trainers. One cannot help but feel for Robert when he recounts his life on the street from July to November. He speaks about not being able to close his eyes at night for fear that somebody would bash his head in while he was sleeping. “If you’re homeless”, he explains “you’re not a human being”. Ignoring such individuals is the plain confirmation of this fact. So is charging them for shelter while wondering why practices such as begging for money and theft are perpetuated in society. It would appear that there are even more levels of not being deemed a human being, as Robert’s experience of being kicked out of a shelter that implements such fees for overnight accommodation shows. 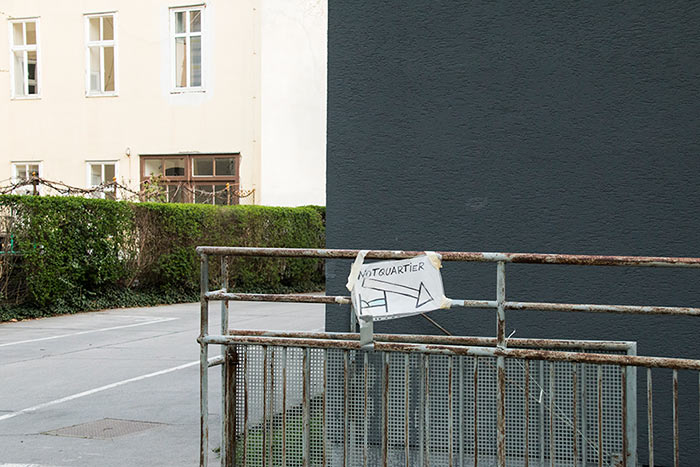 One of the possible places Homeless people can spend the night in. Robert claims that Samariter in 1030 is the best of them. Photo by Ewa Stern

Nevertheless, the success of Robert’s tour and SUPERTRAMPS’ enterprise points out that a dialogue between people despite their flaws and predicaments is possible and very prone to making a huge change in societal convictions and practices. If you are looking for an urban journey that introduces you to high life and the perks of living in a Western metropolis, this might not be the tour for you. If, however, you are after a chance to get involved in something beyond the scope of factual entertainment, you should definitely consider giving SUPERTRAMPS a chance.

Robert's tours are on Sunday at 4PM more info ->

Your post has everything which a good article needs. It is really interesting to read such a perfect article. The words used in your articles are chosen to convey the thoughts of writer. Thank you so much for this excellent writing. Refer best essay writing service to get the perfect writing structure.

No doubt there are considerably more levels of not being esteemed a person, as Robert's involvement of being kicked out of a haven that actualizes such Do My College Homework expenses for overnight convenience appears.

Come here for the sake of Nice blog is here commenting and learning from this whole data.