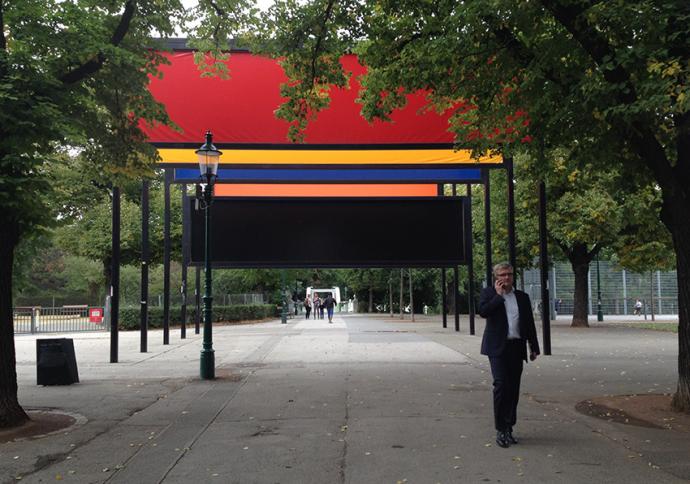 Perhaps you’ve walked through it without noticing, perhaps you look at it regularly. Donald Judd’s "Stage Set“ has been standing in the Vienna Stadtpark since 1996 and has integrated itself since then into its surroundings. 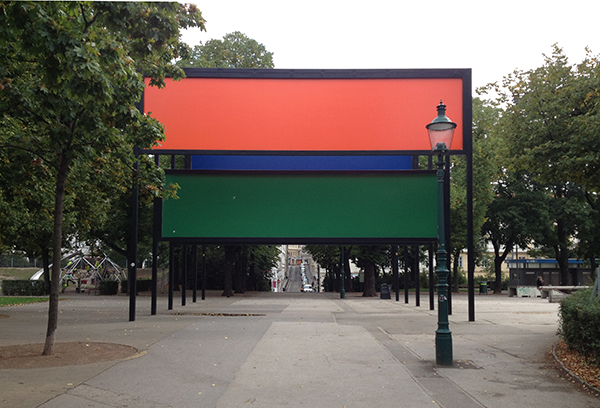 “Stage Set” was created by the American artist Donald Judd (1928- 1994) for the exhibition “architecture” at the MAK 1991. The exhibition consisted mostly of interiors and furniture designed by Judd. While he was never an architect, his examination of space and colour involved architectural concepts which he proceeded to express in three-dimensional objects. “Stage Set” was created especially for the exhibition at the MAK. By creating space inside a space Judd made his concept of space and colour comprehensible. 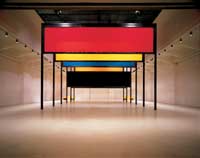 The 10 meter-high and 12, 5 meter-wide sculpture is built of an steel frame and six panels made of synthetic textiles in different bright colours (red, yellow, blue, black, green and orange). The six geometric frames are positioned at two different heights, creating an interesting dynamic that visualizes the serial character of Judd’s works. 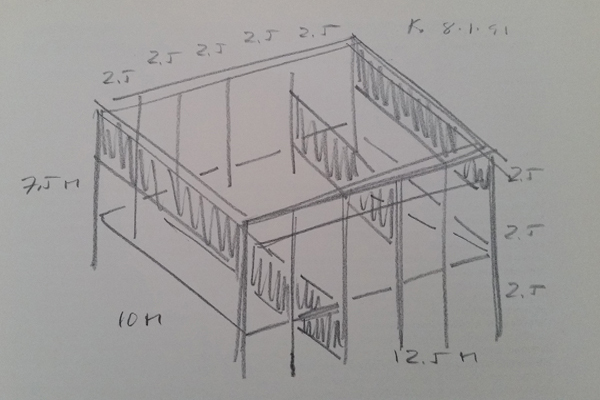 Donald Judd, a pioneer of minimalism, transferred his professional focus in the 1960s from paintings to free-standing artworks and sculptures. He dealt with the subject of space and focused on the use of colours to stimulate the perception of the viewer. Geometrical forms and intense colours were important to convey the “thereness” of his artworks. Judd did not want to create a higher reality or art form, but rather something that conveyed his ideas directly and made them physically present. Converging art and architecture, he preferred permanently installed artworks over short-term curated exhibitions.

After the exhibition in the MAK, the sculpture was gifted to the city of Vienna. It took five years until it found its place in the Stadtpark. The new setting brought about many questions and difficulties, because as the sculpture was devised for an interior, its transfer to the public space came with a variety of conservation problems. The textiles lost their brilliance due to their constant exposure to the elements and had to be restored numerous times. It was necessary to paint the steel frame to keep it from corroding, and the textiles have to be renewed every few years to keep the colours as brilliant as Judd envisioned them. 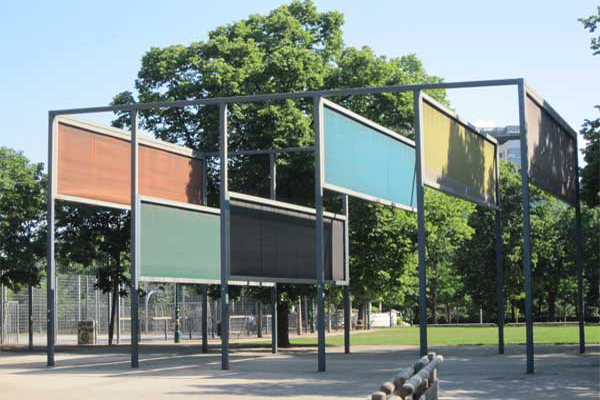 The relocation also altered the viewer’s experience. In the MAK, the visitor approached the red side of the sculpture and could see the red, blue, yellow, black and orange panels, the green one was completely invisible. The visitor could also go around and under the sculpture, but because of the dimensions of “Stage set” it was impossible to see it as a whole from the sides. The placement suggested a “front” and “back” to the sculpture which is no longer apparent. In the Stadtpark, the sculpture is standing in an open space and it is possible to approach it from every direction and to see all the panels at the same time. 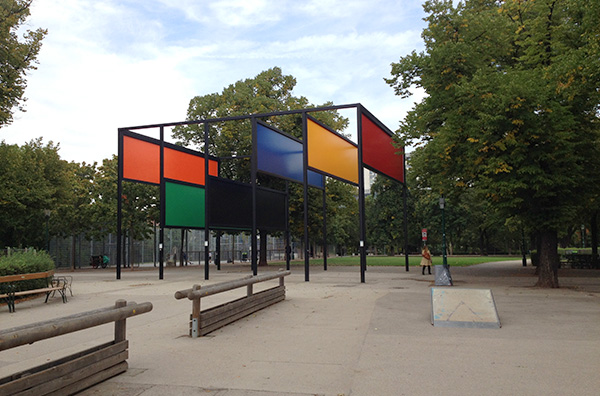 This change in its presentation transformed the way one experiences the sculpture and the viewer’s approach to it. Due to its present placement and the viewer’s ability to approach it from different directions, it is a different work of art. Although the perception of the sculpture has been fundamentally changed by its placement in line with the pathway and the bridge into the park, it now has taken on a new role as a gateway between the first and third districts of Vienna.

How to get there:

so i saw it basically every day... really interesting installation

I used to pass by it and wondered wth? but now thatnks to you guys I know. Thank You