Stina Fors – A mouthful of tongues 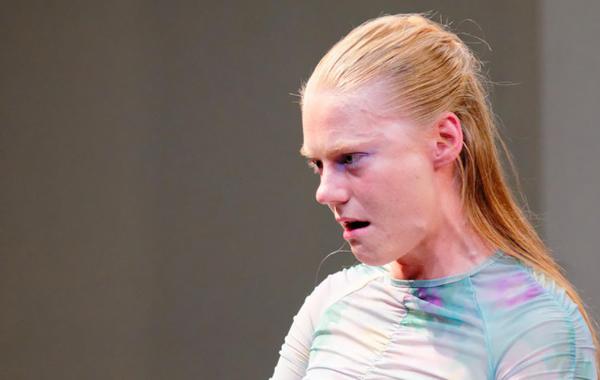 In the performance A Mouthful of Tongues, the mouth becomes the theatre. Experimental vocal techniques such as growling, ventriloquism, tongue work-outs, dinosaur calls, and more create a journey where many bodies and sounds are brought into dissociative relations. The body is not in relation to its voice or its sound. Confusion comes and goes and manners of communication break into one another. This performance celebrates the mouth as a potent channel where communication can be formed, expressed, torqued, destroyed, and resurrected. We hear fragmented stories, thoughts and emotions of other places, delirious landscapes – of something that sounds like English but is not.

The mouth is a cavity for things to enter and for things to come out, a channel? For things to stay? A chamber? For things to be sexual? Language? For things to be mistaken? A hole? With a pipe? A bagpipe? What comes in, what comes out? The air, the light, road songs, dirt, eat it, the prey, the taste. Absorb surroundings too. Gag, spit, and vomit. Blowing kisses – inner speech. Bite, be a mouth, and the body that comes with it is a meat sack, heavy and juicy.

Stina Fors was born in Sweden and works as a choreographer, performance artist, drummer, and vocalist. Currently based in Vienna, she sometimes kills with a powerful voice, sometimes seduces until exhaustion. Her howls are not bare words; they are fused with spits and fluids, a certain wetness – punches in the face, a licking of your heart, lubricant for your soul. Stina found her love for sound and the voice and from there developed a repertoire of solo performances driven by the interest for what a ‘sounding body’ can be. Experiment and improvisation is often used live as a creative strategy. Stina received the Moving Forward residency at Dansmakers, DansAteliers, and DansBrabant (NL). She graduated from the School of New Dance Development in 2019 and was selected for the danceWEB scholarship 2019 as part of the ImPulsTanz festival in Vienna. She has shown her work internationally and also performs regularly in the underground music scene with her one-woman punk band.

A co-production by Stina Fors and imagetanz/brut Wien. With the kind support of the City of Vienna’s Department of Cultural Affairs, Huggy Bears art space, Raw Matters, and Im_Flieger.