Claudia Bosse: ORACLE and SACRIFICE in the woods 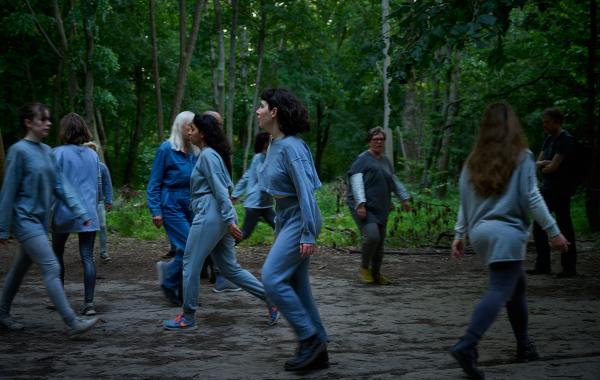 Will the trees have revolted? Claudia Bosses’s new work calls for an encounter with the non-human, exposing the audience to the bosky landscape of Vienna’s Prater. Who or what are we going to encounter there? ORACLE and SACRIFICE in the woods is a search for traces of mythologies, knowledge about nature, phenomena, and spirits. An exploration of the undergrowth, a nomadic speculation on matter and molecules, somatic cells, and sound waves, becoming and being past – with organs, plants, and fungi, compositions, sounds, and costumes. An installation in the woods with song, choral constellations, and the breath of the forest.

One question, whispered into the ear of the sacrificed sheep, hangs in the air: How much longer will Gaia be able to carry us? Artemis, goddess of the woods, the animals, the children, and the women, calls for contemporary rites of spring at sunset, setting in motion organs, bodies, and viscera in deep connection with the materials of the forest, exploring social utopias of co-existence, and constituting theatre as a landscape.

Claudia Bosse lives in Vienna and Berlin and works as a director, choreographer, artist, and head of theatercombinat. Her works negotiate forms of violence, history, and concrete utopias. She describes her space-consuming choreographies, in which she interweaves myths, rituals, texts, and documents with bodies, language, objects, and choruses to create her pieces, as ‘art in a temporary community’. Inside and outside of Europe, in museums, architectures, theatres, landscapes, and urban spaces, Claudia Bosse devises site-specific works and interventions. She is currently working on commune 1-73 with 73 fragments on the Paris Commune of 1871 and on her four-year project ORGAN/ismus poetiken der relation. Her most recent works include ORACLE and SACRIFICE 1 oder die evakuierung der gegenwart at Tanzquartier Wien and FFT Düsseldorf, and the last IDEAL PARADISE in Jakarta, which also featured at Deutsche Tanzplattform in Essen. www.theatercombinat.com