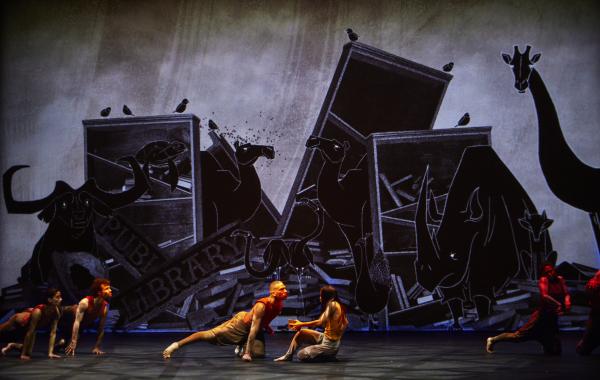 Mowgli is a girl in this version of The Jungle Book, and British star choreographer Akram Khan has made many more changes to the plot of Rudyard Kipling’s book from 1894 in his sensitive reinterpretation. He has transposed it to a future marked by the effects of climate change. The world is experiencing a great flood; Mowgli escapes it and makes it to the jungle only by a miracle. Khan’s dancers embody the well-known animal characters Bagheera, Baloo, Raksha and the eerie Kaa with mastery. The animals are threatened by a sinister hunter, the monkeys want to become as powerful as the humans. The heroine Mowgli faces a great challenge. Once again, Akram Khan takes up the major issue of the climate crisis and tries to draw attention to the urgency without distressing his audience: with outstanding dance, poetic video animations, music that gets under your skin and texts that move you. Greta Thunberg’s voice sounds as if from a distant past: “How dare you?!”