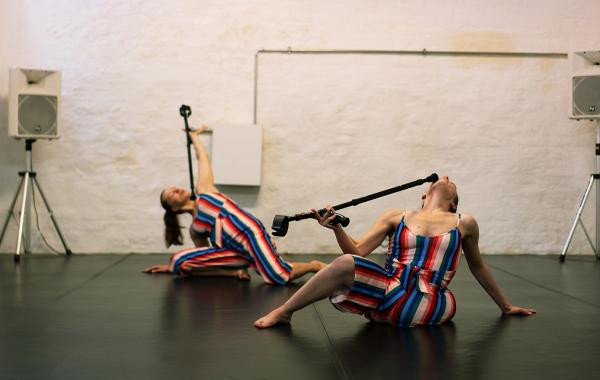 In their dance performance j_e_n_g_a, three-legged Tanja Erhart and two-legged Katharina Senk are all about pleasure: as a radical interface in the discourse between disability and feminism and as a delightful resource of movement in interaction with Tanja’s crutches. Those two crutches, jointly with the two dancers and the audience, create a multi-sensory game that makes us feel what interdependence means while at the same time bringing out the pleasure of joint radical movement.

What brings the two dancers Katharina Senk and Tanja Erhart to stage is their shared urge to dig deeper into the movement repertoire and animacy of objects paired with the aspiration to create sensual approaches to performance. The crutches function as social connectors and animated dance partners that, proverbially speaking, move Katharina and Tanja while also opening up sensual opportunities for the audience to encounter, and relate to, one another.

Alison Kafer writes in her book Feminist Queer Crip that disability does not simply exist but arises in relation. The performers celebrate this perspective as a novel take on disability, queer animacy of objects and the creation of new body subjectivities.

Tanja Erhart, London-based Austrian, defines herself as a crip – i.e. disabled and chronically ill – dancer and cultural anthropologist. She performed worldwide in pieces by Claire Cunningham, Michael Turinsky, the Candoco Dance Company and many more. Currently, Tanja is exploring the movement languages of her three different body minds: with her wheel-chair, with one leg, or with three legs a.k.a. with crutches. She is also discovering the accessibility and pleasure activist in her as she tirelessly engages in discussions on dance, ableism, access and care.

Katharina Senk is an Austrian dance artist who lives in Vienna. She performed in pieces by artists of the likes of Doris Uhlich, Florentina Holzinger and Georg Blaschke. In her art, Katharina works to combine her interests in (post-)humanism, feminism and social justice with her knowledge in the fields of dance, movement and martial arts. In collaborations with her colleague Tanja Erhart, she is dedicated to exploring sensual dance practices with “(assistive) objects”.

The performance on January 21st will be followed by an artist talk.

An online version of the project will be shown on January 23rd at 6:00 p.m. as a live stream on brut-wien.at. No registration necessary!

Pressestimmen
"The two artists met at a conference in Berlin in 2017 and have been collaborating ever since, developing unique methods along the way." (springbackmagazine.com)

"Despite the long-distance nature of their working process, their excitement and care for one another is palpable, tactile, tangible. Together, they are joyously deconstructing what collaborations between disabled and non-disabled artists may be, practising allyship with intersectionality in mind." (springbackmagazine.com)

A co-production by Tanja Erhart, Katharina Senk and tanz.sucht.theater with brut Wien.

With the kind support of the City of Vienna’s Department of Cultural Affairs, the Austrian Federal Ministry of Arts, Culture, Civil Service and Sport, METAL Culture UK, Im_flieger, beat1060 Vienna, D.ID – Dance Identity and ImPulsTanz Festival.
The artists were selected by the brut audience club BEATE, an initiative as part of the EU project Be SpectACTive! - co-financed by the Creative Europe program of the European Union.