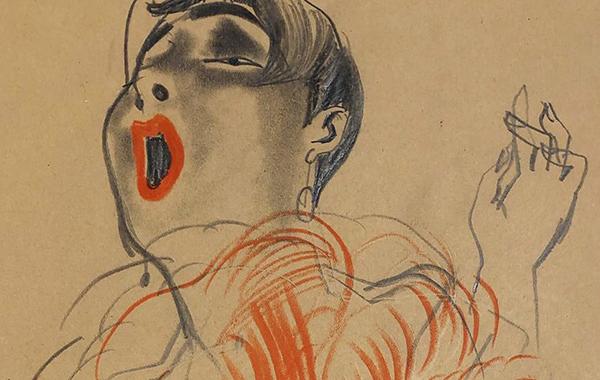 Willkommen, Bienvenue, Welcome! Step into the pulsating world of cabarets, clubs, and cafés. Opening in February 2020 at the Lower Belvedere and Orangery, the exhibition Into the Night explores art and culture from the 1880s to the 1960s through the lens of these alternative scenes.

In Vienna, the Cabaret Fledermaus, founded and designed in 1907 by key members of the Wiener Werkstätte, marked the transition from Secessionism to Expressionism. In Paris in the 1880s, the Chat Noir and its shadow theater anticipated cinema. In Zurich, Dada was founded at the Cabaret Voltaire while in Rome, the nightclub Bal Tic Tac designed by Giacomo Balla and Fortunato Depero’s Cabaret del Diavolo were incubators of Futurism. Meanwhile, Theo van Doesburg, co-founder of De Stijl, partly shaped the Minimalist design of the Café L’Aubette in Strasbourg. In Berlin between the wars, the electrifying energy of the nightclubs fired the imaginations of artists working in the styles of Expressionism and Neue Sachlichkeit, such as Otto Dix, Jeanne Mammen, and Elfriede Lohse-Wächtler.

Nightclubs, cafés, bars, and cabarets were vibrant hubs of modernism in the twentieth century, providing artists with a platform for a creative exchange of ideas between painting and graphic art, architecture, design, literature, dance and music. The exhibition looks at many of these locations around the world and explores these fertile artistic environments and their lasting influence on the history of art. It deliberately goes beyond the boundaries of a Eurocentric perspective. Not only does it examine the iconic venues of the avant-garde but it also transports the viewer to the Café de Nadie in Mexico City and the Harlem Renaissance at the New York jazz clubs of the 1920s and 1930s, whose protagonists took up the fight against racism. It concludes with the Mbari Clubs, founded in the early 1960s in Ibadan and Osogbo, Nigeria, and the Rasht 29 Art Club, which was opened in Tehran in 1966.

The exhibition has been organized in collaboration with the Barbican, London, where it is on show from October 4, 2019 to January 19, 2020.