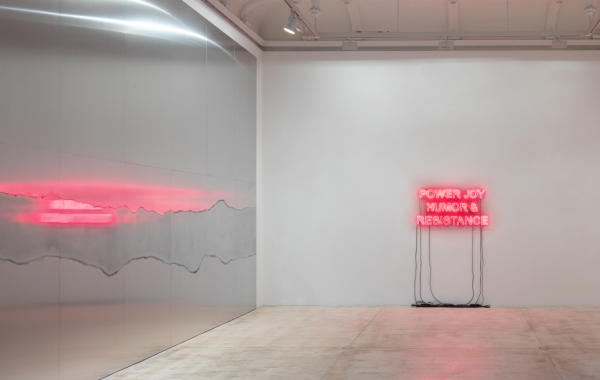 The title STAGECAGE of Monica Bonvicini’s first solo exhibition at Galerie Krinzinger is related to a show of architectural Stagecraft models at the Columbia University. From the sprayed drawings of Never Tire, (2020) to the large-scale installation Be Your Mirror, (2020) to the new sculpture Stagecage, (2021) we find a reflection and a continuation of Bonvicini’s involvement and research of the establishment of private space altogether and its discontents, such as isolation, exclusionary dynamics, disappointment, and the rise of reactionary feelings.

At the centre of her solo show is the neon brightness of Joy, Power, Humor & Resistance (2020) which like a commercial billboard sign advertises the positive dimensions of labour – as a workforce which can come together to stand up to capitalistic oppression.

She investigates the relationship between architecture, power, gender, space, surveillance, and control and questions the meaning of making art, the ambiguity of the language, and the limits and possibilities of freedom.

The architectural installation As Walls keep Shifting from 2019 is echoed in the model alike sculptures that replicate the social houses of northern Italy while collaging them together in a new constellation, not next to each other but on top of each other. They are resulting in an image like that of a collapsing structure. Held together by clamps and leather belts they create an uncanny narrativity within the extremely clean and perfectionist models. It explicates Monica Bonvicini’s artistic involvement with architecture and the intrinsic relationship it has to history, memory, and exertions of power. The sculptures on mirror tables are both stage and staged, they investigate the entanglement of place-making and sense-making. Bonvicini takes the act of “building a house” as an artistic exercise filling it up with feminist desires and witty phantasies, continuously shifting its forms and concepts. The bare nature of the structure reveals both the beginning and end of architecture; both the metaphorical construction of all buildings, as domestic, habitual, and socially regulating spaces, as well as the remains made visible as houses are left to dereliction through socioeconomical ruin, wildfires or other natural disasters exasperated by climate change as in Bonvicini’s series of black and white drawings Hurricanes and Other catastrophes (2008).

Her research materializes in the site-specific work Be Your Mirror in which the architecture of the gallery is taken as a starting point for reflecting on its own function, the imposition of seduction that art suffers from exemplified in the half-mirrored surface of the 20 aluminium panels that are otherwise unclean and foggy. Be Your Mirror is reflecting the clear image of the gallery’s visitors through manual labour, reminding us that everything that shines is the product of hard, continuous labour and care.
Whether in the context of emotional labour, as explored in the series NEVER TIRE, or through the historically unrecognized labour of women with The Yellow Wallpaper (2021) the show presents the visitor with familiar totems of design and architecture to problematize the relationship between design, labour and built environments. This is tangible in Pendant (Guilt) #2 (2020) which utilizes the aesthetic of public spaces, wardrobes, and changing rooms–those transient antechambers which we unconsciously pass through each day, made uncanny and volatile by the words GUILT.