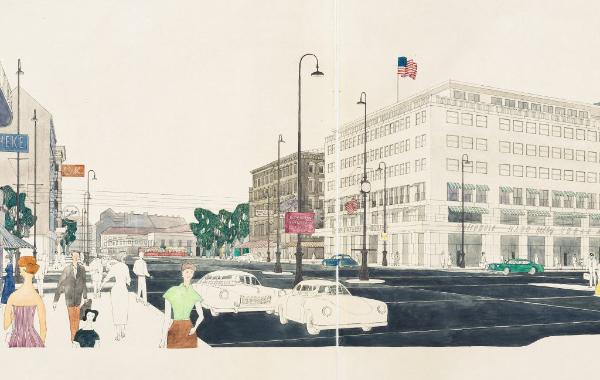 After the liberation of Austria in spring 1945 and the occupation by the four victorious powers of Great Britain, France, USA, and the Soviet Union, Vienna became a central stage for the Cold War. The competition of the systems was a lso carried out in the field of architecture. The Cold War and Architecture exhibition highlights building activity in postwar Austria, as well as its protagonists and debates for the first time in the context of the global East-West conflict.

During the ten-year occupation, Austria experienced the transition from an authoritarian system of government to a democratic consumer society. Each of the Allies established an extensive cultural program. Architectural exhibitions became important instruments of an “educational program” for a new social order. The cultural policies of the British, Americans, French, and Soviets served as catalysts for their respective ideological convictions. Their cultural directives were aimed at different target groups, from the expert public to the general population. At the same time, they came up against local traditions, interests, and networks that used the cultural transfer and conflicts of the Cold War for their own professional advancement.

Divided into four zones, the exhibition traces the cultural self-representation of the Allies, complemented by the consideration of two transnational networks of modernism: CIAM Austria and the International Summer Seminar (today European Forum Alpbach). The Cold War did not end with the withdrawal of the Allies in 1955. Architectural exports to Southeast Asia and the Middle East shed light on the accompanying effects of Austria’s increasingly active foreign policy.

The Cold War and Architecture exhibition alters the view of global and Austrian architectural history. A main focus is placed on the inclusion of previously unexamined primary and secondary sources, many from the Architekturzentrum Wien collection. In the transnational synopsis, they produce a genre picture of postwar modernism.