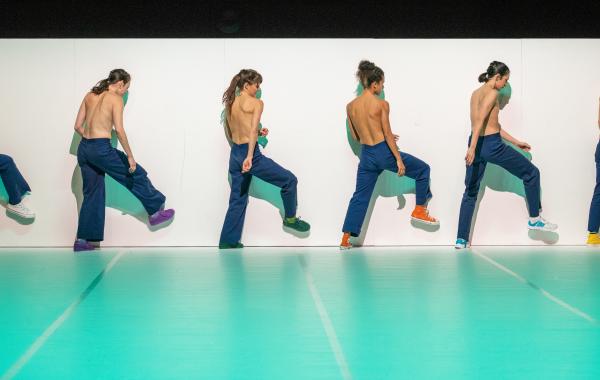 Danses macabres are being played on this performative turntable, such as can be found on some old frescoes. “These grotesque dances conjure up comic characters making fun of death, as well as rather tragic figures”, says Mathilde Monnier. György Ligeti’s opera Le Grand Macabre served as initial inspiration for this work, which was created at the beginning of the pandemic. It’s about memory: about capturing music on records and about documentary records against forgetting. Monnier is convinced that the feeling of confinement in lockdown should remain in the public consciousness. This is why – first, as if dazed but then with increasing feverishness – the six performers in RECORDS soon show clear signs of madness. Currently among the most influential French choreographers, Monnier has built a kind of resonance box in this group piece, and it is only from its reverberations that the movements and the structure of the piece emerge. RECORDS thus becomes a dialogue between the choreographer and the dancers.