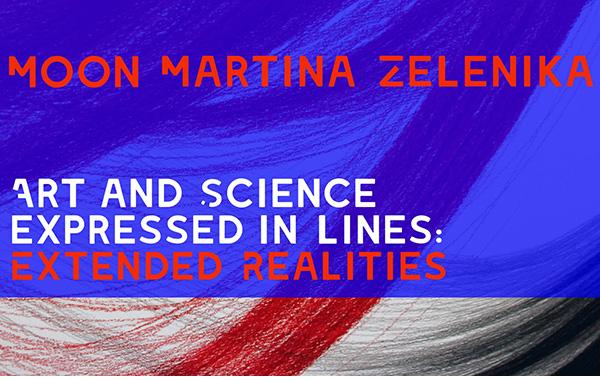 The concept of this exhibition focuses on two complex artworks of the artist MooN Martina Zelenika. On one side, the art project and performance Receptilium is present as a documentation in form of a video. It is an audio-visual live performance acted by the artist herself in 2018. Brain waves and motion data from her hands, which were transmitted while the artist was drawing in a traditional medium, were converted into sounds in real time. Through the sounds that create a specific music and through the visual results based on the performance, the artists’ intention within this work is to allow the audience to perceive in an abstract way the surface of the moon. On the other hand, within this exhibition is presented for the first time the artwork La Petite Mort. It is an artwork based on the technique of Augmented Reality and is used via a smartphone App under the name of MoTHA (Metaprogramming of The Human Algorithm – the new series of MooN). With these App life sized drawings, which are seen as still sequences coming to life, the drawings can also be interacted with by the users. The processes here represent a kind of brief loss of consciousness, which according to the artist describes the stage of „post orgasm”, or „transcendental state“. In both projects, the artist involves for her creation some type of meditation techniques linked to the practice of inner alchemy. Besides the technologies that were developed specifically for each artwork, visually, both presented artworks are consisted of lines.

Lines in the artworks of one of the most known abstract painter, Wassily Kandinsky, represented the values of music, they were used to describe different tone tonality, tone length, etc. MooN Martina Zelenika also uses lines in connection with music, and respectively with sound. However, in MooN’s artworks, besides representing tones or notes, lines express the connections between the real and the virtual world, connections between past and present, between technological and traditional art, connections between our world and the universe, between seeable and unseeable things, between consciousness and unconsciousness. Also related to other artworks that she has done until now, MooN uses those lines in combination with the technology to create trans-lines, trans-surfaces, trans-spaces that are inside of us, or that surround us. The lines in her artworks are light, or created through a pencil, they are still or in movement. They vibrate, oscillate or move in a spiral direction transporting their message in the form of energy directly to the viewer. The viewer is integrated in this world existing in-between the artwork and his or her perception and feelings. Her studies for the artworks that belong in these series are based on the perception of the human species as an optimized algorithm, pointing out the kind of optimization that emerges during the process of the artistic creation. Those thoughts that are inspired by so-called evolutionary algorithms, or genetic algorithms, include the process of the “survival of the fittest” in the aspect of matches between human spirit and its genetic-based physical conditions. Furthermore, since the main aim in MooN’s work is to bring the humanity and the artistic creation process to its highest level, she is also optimizing while she is selecting, creating, modifying and correcting analogue and digital drawings to create an AR – extension or extensions through the visualisations of the brain waves. This will be offered to the visitors within this show. The individual experience of the visitor is here a unique aspect that the artist carefully integrates in her presentations.