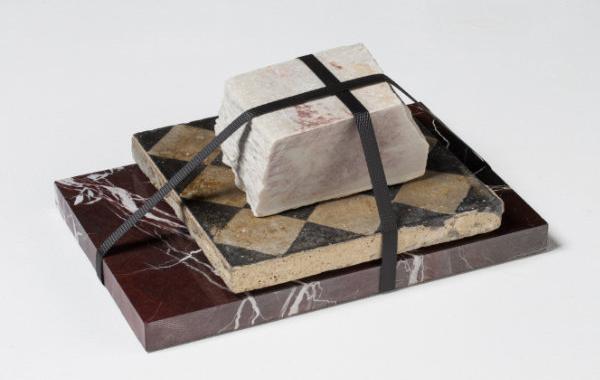 Cities undergo manifold transformations – in size, in political structure, in demographics, in function, in identity. And in their physical appearance, their volume, their surface.

Andreas Fogarasi’s series of nine sculptures, presented at Kunsthalle Wien, document the changing surfaces of a city, Vienna, by appropriating actual fragments of recently demolished buildings, as well as of those that replaced them.

The history of architecture is preserved through photographs, written descriptions, plans, sometimes models. It is kept in the public memory and collected by dedicated academic institutions or enthusiastic individuals, whose emphasis is mostly on landmark buildings, historical ensembles or famous architects’ achievements. One fundamental aspect of a building, of a city is too often overlooked and disappears undocumented – its tactile surface, color, skin. The project follows a selection of buildings in Vienna that are demolished to make place for new constructions, or stripped to their core to receive new facades and interiors.

For the exhibition, actual parts of the buildings are collected, parts that are taken down, but also parts of the new constructions, facade panels, floor tiles, fragments of windows and doors, material and color samples. Each building is represented by its materials and surfaces, pre- and post-reconstruction. The result is a series of highly abstract and at the same time totally realist sculptural documents of the changes the buildings (and the city) are undergoing.