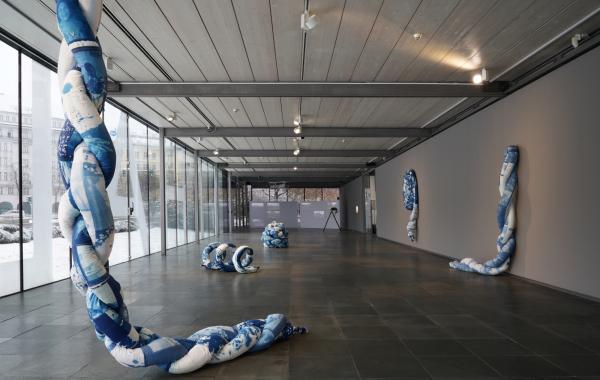 Each in her own way, the award-winning artists, Abiona Esther Ojo (graduate of the Academy of Fine Arts Vienna) and Huda Takriti (graduate of the University of Applied Arts Vienna) probe questions concerning their positions in diverse cultural and historical as well as personal-biographical contexts.

By weaving together documentary and narrative elements, confronting the past with the present, dismantling barriers of space and time, and reflecting on the social potentials of distinctive moments in community life, they craft narratives that intertwine the real with the fictional while also insistently untangling the strands of the latter.

“Abiona Esther Ojo’s profound installation Die Magie steckt in jeder Strähne (There’s Magic in Every Strand) unfolds the social and political implications of Black hair through the lens of cultural history, but in from a very personal perspective. Combining sculptural, analog-reproductive, and digital media, she deftly connects the practice of creating Afro hairstyles, which is bound up with knowledge, collective memories, rituals, and intimate processes, to general questions of identity and representation—from the message as a signal of protest to a well-established code of community membership”, so the Kunsthalle Wien Prize jury’s reasoning.

Its decision for Huda Takriti‘s diploma was explained by the jury as follows: “… [her] meticulously executed multimedia installation of cities and private living rooms interweaves factual and fictional elements, private and collective archives, analog and digital images in a polyphonic narrative that operates as a kind of political subconscious. Her persistent efforts to untangle the complexity of histories of migration and diaspora, geopolitical realities, and projections of identity without reducing them to markers of identity and the quest for a universal truth struck the jury as exceptionally compelling.”

Abiona Esther Ojo (b. Hellmonsödt, Austria, 1992, lives in Vienna) studied sculpture and spatial strategies with Monica Bonvicini and Stefanie Seibold at the Academy of Fine Arts Vienna and graduated in 2020 with a project supervised by Iman Issa.

Huda Takriti (b. Damascus, Syria, 1990, lives in Vienna and Damascus) studied drawing and painting at the Faculty of Fine Arts in Damascus. In 2020, she completed the master’s program in TransArts at the University of Applied Arts Vienna with a project supervised by Roman Pfeffer and Kathrin Rhomberg.