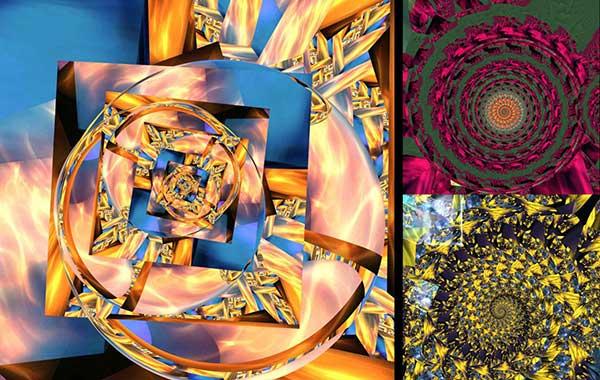 This talk will review several case studies in experimental digital multimedia art and design that explore Western and Non-Western conceptions of space-time. This includes Illuminations (2013) an interactive visual-music installation influenced by Asian folding screens that incorporates plant biofeedback, ubiquitous computing, and electro-acoustic music. Inspired by Indian textiles, symbols, and cosmologies, Mayur (2015), a 4K animation, and Vishwaroop (2014), a generative dome animation, explore Asian spatiotemporal patterns and rhythms. Both of these works feature original music by sitar virtuoso Kartik Seshadri. With the advent of Big Data and the Internet of Things (IoT), new possibilities for exploration of space-time at global scale emerged, leading to Mood of the Planet (2015), a kinetic light-sound sculpture employing real-time social media data to detect the current “mood” of people at diverse locations around our planet. It also led to In Other Wor(l)ds (2018), a series of large scale illuminated tapestries that feature textiles, embedded systems, networks and global environmental data. Inspired by the Chinese philosophy of Chi and Schoenberg’s quartet “I feel the air of a different planet”, In Other Wor(l)ds conveys how the energy of the Universe is like the air that surrounds us, and the winds of other places move the fabrics that touch our bodies in the breeze. Digital Amulet: Smart Necklace (2017) incorporates 3D printing and wearable computing, with biofeedback and visual music for communication and meditation. Sorensen’s current project, Prakempa is inspired by a classical Balinese text about the connections between cyclical calendars, gamelan music and emotions, in collaboration with Balinese ethnomusicologist Prof Made Bandem.

—
Vibeke Sorensen is an artist and professor working in digital multimedia and animation, immersive media, interactive architectural installation, and visual music. Her work spans more than four decades and has been published and exhibited worldwide. Her research and creative work has been supported by the New York State Council on the Arts, the US National Science Foundation, the University of Southern California (USC), and Intel Corporation, among others. She is a 2001 Rockefeller Foundation Fellow in Film/Video/Multimedia. In 2007 she was the Chair of the ACM SIGGRAPH Art Gallery: Global Eyes. From 2009-2019, she was Professor and Chair of the School of Art, Design, and Media at Nanyang Technological University in Singapore, where she was Founding Director of the Centre for Asian Art and Design. Also, since 2016 she has been Adjunct Professor of Design, Games and Interaction at the Royal Melbourne Institute of Technology in Australia. Currently she is in residence at the Complexity Science Hub in Vienna, Austria.