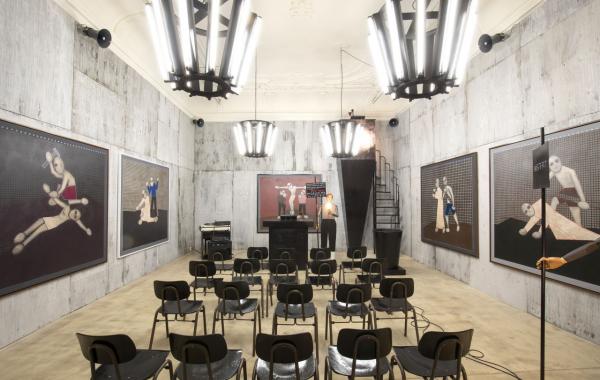 The invitation card for Thomas Zipp's fourth solo exhibition at the Krinzinger Gallery shows a photo from the 1950s of a conference organized by the "Organization Mondiale de la Santé" (World Health Organization) on the subject of mental health. Thomas Zipp added the year 2020 to the image to investigate the present status quo of human’s mental health.

The World Health Organization sees stress as one of the greatest dangers of the 21st century. Therefore it can’t be a coincidence that new lifestyle coaches have had incredible success on the Internet and various social forums. They promise millions of followers satisfaction, security and spiritual balance through spirituality. Among them is Germany's most successful mindfulness trainer Laura Malina Seiler, who as a "Coach for Mindful Empowerment and Modern Spirituality" invites people from all ages to her coveted workshops in Berlin. What paves the way to more happiness for some may seem dubious and ridiculous to others. In his exhibition, Thomas Zipp deals with the question: what does a person seek to satisfy the soul?
Formally, the two rooms should contrast spirituality and psychology, as if the visitor could choose between confession and the psychotherapist by choosing one of the two rooms. In fact, in Thomas Zipp's art, these boundaries are blurred. One side should not rule out the other. For years the artist has been interested in sciences that try to measure psychological experiences empirically. The teaching of psychophysics, which examines the relationship between external stimulus and psychic experience, has accompanied the artist for years. His painting symbolizes this interest. Zipp often combines mathematical grids, writing and a formal strictness with spontaneous and free elements and psychological portraits. As a rule, drawings and color accents are built up layer by layer on a dark background. Through this collage-like technique, Zipp connects many levels with each other and thus creates new references.

Thomas Zipp (born 1966, lives and works in Berlin) is one of the most influential contemporary German artists. He taught at the University of Fine Arts in Karlsruhe and at the University of Applied Arts in Vienna. He has been a professor at the Berlin University of the Arts since 2008. His works have been shown in numerous international solo and group exhibitions, including the Kunsthalle Fridericianum in Kassel, Kunsthalle Düsseldorf, Kunsthalle Gießen, Deichtorhallen Hamburg, Overbeck-Gesellschaft, Lübeck, Bundeskunsthalle, Bonn, Städtische Kunsthalle Mannheim, Migrosmuseum für Gegenwartskunst, Zurich, Museum of Modern Art, Warsaw, Den Frie Center of Contemporary Art, Copenhagen, Cc Foundation Shanghai, Saatchi Gallery, London, Irish Museum of Modern Art, Dublin, MoMA New York, Tate Modern London and the MCA Chicago. He participated in the Biennials in Berlin, Dakar, Poznan and Venice as well as in Manifesta 11 in Amsterdam. His works are represented in various public and private collections, including in the Berlinische Galerie, The Henry Art Gallery Collection, Washington the Falkenberg Collection, Hamburg, the Goetz Collection, Munich, the Lenbachhaus Munich, Benedikt Taschen, Cologne, the Mühlheim an der Ruhr Museum of Art, La Colección Jumex, Mexico City, the MOCA Los Angeles, Vicky Hughes and John Smith, London as well as the Saatchi Collection in London, the Rubell Family Collection in Miami or the Boros Collection in Berlin.