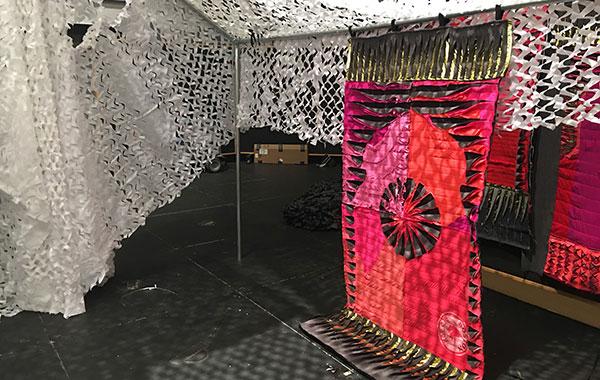 The T-Serai outlines a cultural approach to humanitarian intervention through the creation of modular tapestries that can be assembled to form mobile cultural shelters. These tapestries are produced through workshops aimed at fostering transcultural exchange and collaborative design with displaced communities. The T-Serai is inspired by the tent traditions of the MENA region. Historical patterns and textile crafts are reinterpreted in "reverse appliqué" technique using recycled clothes. The overproduction of the global textile industry is seen as a resource for new forms of cultural preservation: the T-Serai tapestries can be used for storage, insulation, and recording of personal memories. The textiles are also used to set up storytelling tents that activate textile motifs from different regions towards immersive social gatherings and knowledge sharing across borders. Produced across USA, UAE, and Syrian refugee camps in Jordan, the creation and use of the T-Serai allows for establishment of civic spaces in conditions of containment and cultural deprivation.

The T-Serai challenges the economy and life as bios approach of the humanitarian aid system by proposing a new paradigm: culture first! The T-Serai project is funded through exhibitions that showcase T-Serai prototypes, while supporting the community-driven creation of T-Serai pavilions in refugee camps. The educational format in the camps combines training in textile fabrication methods with lessons in history of nomadic architecture and textile design. The project is developed in refugee camps Zaatari and Al Azraq in Jordan, in partnership with humanitarian organisations CARE and NRC, with a seed funding from the Sharjah Museum.
_____

*Azra Akšamija is the Director of the MIT Future Heritage Lab (FHL) and an Associate Professor in the MIT Art, Culture and Technology Program. Her artistic practice and academic research explore how social life is affected by cultural bias and by deterioration and destruction of cultural infrastructures within the context of conflict, migration, and forced displacement. The Future Heritage Lab, a research lab and transdisciplinary studio at MIT, operates at the intersection of art and design, heritage preservation, and humanitarian relief to invent creative responses to conflict and crisis. FHL designs pedagogical frameworks, creative tools, and co-creation processes to support communities in threat and advance transcultural understanding on a global scale. Since 2016, the FHL team has been working at the Al Azraq Refugee Camp in Jordan, in collaboration with the humanitarian aid organisation CARE and local cultural institutions.
Apart from FHL, Akšamija’s work has been exhibited in leading international venues, including the Generali Foundation Vienna, Liverpool Biennial, Sculpture Center New York, Secession Vienna, the Royal Academy of Arts London, Queens Museum of Art in New York, Design Week Festivals in Milan, Istanbul, Eindhoven and Amman, and the Fondazione Giorgio Cini as a part of the 54th Art Biennale in Venice. In 2013, she received the Aga Khan Award for Architecture for her design of the prayer space in the Islamic Cemetery Altach, Austria.