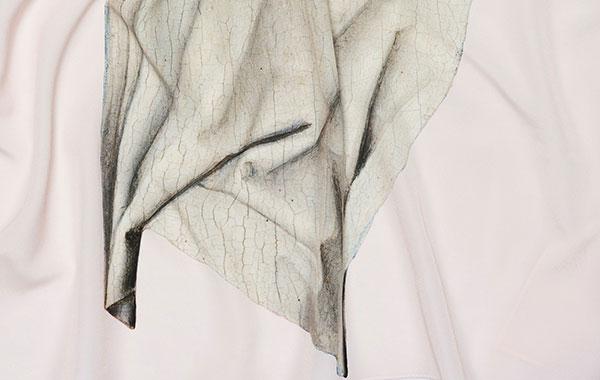 Since 2010 the FOTOGALERIE WIEN has put on an annual solo exhibition showcasing the work of a young, upcoming artist. This series of exhibitions, SOLO, functions as a platform and springboard for artists who are at the beginning of their career but who already have an extensive body of work that we want to present to a wider public. The aim is to achieve a sustainable level of public presence for the chosen artist and includes helping to organize cooperations and touring shows. For SOLO X we have invited the artist Olena Newkryta who was born in 1990 in Ukraine; she lives and works in Vienna.

In her photo and video works Olena Newkryta does not look for the „reality“ of the world in reproducing images but in the discrepancy between presence and absence. She is involved with moments of closeness and disappearance and translates these into abstract pictures. One recurring motif is the vestige as materialised contact of light with the photo material and equally, as remaining impression of a body. The idea of contact also links the works shown in the exhibition. For the photo series, to grasp. carnal thoughts, the artist passed a hand scanner over her bed. Fragmentary depictions of body impressions in the sheets and pillows were then digitally assembled – incomplete and partial memories of the body that produced the forms. The series, one month on skin, bears witness to direct contact with the photographic material. In order to make it, Newkryta asked friends to carry a developed unexposed negative on their body for a month. In this way movements and bodily reactions were inscribed into the material. The print from the negative, the work, is both an intimate portrait and the result of a joint act. In other works Newkryta turns the recipients of the exhibition into a part of her works (as in the case of the installation, denn erst das gesehene Bild ist in Wahrheit ganz Bild geworden) or she makes the act of production itself the issue. sewing screens, a three-part video projection, shows the artist’s hands as she moves lengths of fabric through a sewing machine: they are making the screen on which the video is to be projected. Screen and video only exist simultaneously; one cannot exist without the other. In her most recent installation the artist depicts how images are dealt with in different social contexts and refers to the veneration shown to icons in Orthodox Christian churches by touching them. Newkryta indicates the value we assign to images through the abstraction of her translation. By means of depictions of touching, vestiges and ascriptions, Newkryta’s works indicate the tense relationship between presence and representation and implicate political aspects in the process. Her works subtly raise issues as to who is given visibility, who represents and is thus, ultimately, part of a collective fabric. In this way production of and interaction with images can be read as social practices that fulfil social functions and thereby (re)produce relationships in the world.