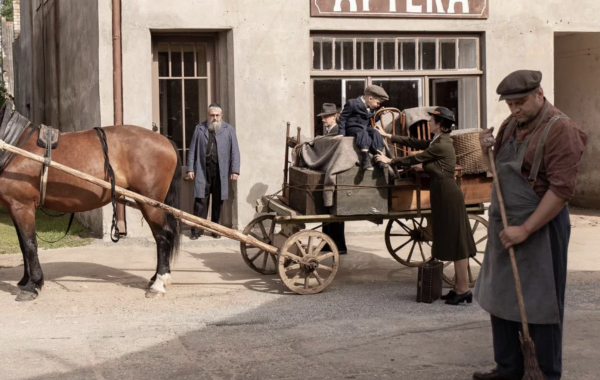 The Sign Painter is a Latvian drama about a young artist who bears witness to the dramatic political upheavals of the WWII era. As brutal regimes come and go, his country, his village, his people, and even his heart are swept up in the inexorable currents of history.

Ansis makes a living as a sign painter, and there is no shortage of work. With each new occupying regime comes a new preferred colour palette and a new name for the main street: Freedom Street is changed to Unity Street, and then changed yet again to honour first Stalin, and then Hitler. But Ansis dreams of making something of himself, and harbours aspirations to be an artist. encouraged by Bernstein, the Jewish shopkeeper and the father of Ziselle, Ansis starts to paint the townspeople. Ziselle, a proto-feminist takes herself off to the city to study as a teacher. By this time, Naiga and her family have arrived in town. The daughter of the new pharmacist, Naiga has set her sights on Ansis. As Ansis’s painting style becomes harder and more uncompromising, so does life in the town. The communists send trains full of Latvian townspeople to Siberia – Ansis and Naiga escape thanks to a warning from Ziselle, now a secretary to the Communist regime. Then the Nazis round up the Jews and herd them out of town to an uncertain fate. Ansis returns the favour by hiding Ziselle in an attic. It’s a cause of friction with Naiga, who is more than happy to cosy up with the occupiers.

A musical motif, a riotous Klezmer wedding celebration which is used whenever the power shifts in town, takes on added emotional weight with each chapter. It’s a potent reminder of all that has been lost over time – the absent people, and the joy which is conspicuously missing from life in this town.