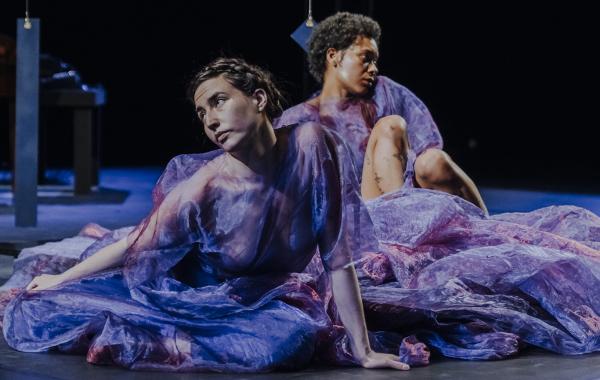 Dancers Yuika Hashimoto and Lucie Piot, Evi Filippou on percussion/vibraphone and Georg Vogel on synthesizer and his self built key instrument M-Claviton perform a polyrhythmic glissando into a diagonal feminine state of being, questioning an imposition of diagonal lines on the female body, leading from a projection, eroticization and fetishization of a desired strangeness, a mystified seductiveness into a ritual of submission. The rhythm is based on the menstruation cycle, the choreographic material derives from paintings, sculptures and images representing an ideal of the feminine- from the figure of the virgin Mary, European renaissance Art until today. In PoLy-Mirrors, the visual artist Lola Drubigny is creating a space for reflections of gender and a place for the mirroring of dance and music. Within this room, one subject is fixed, the other takes off, orbiting in circles and emerging into queerness.

Together, n ï m company is facing and playing with the “dance of contempt” of patriarchal masculinity by reclaiming and re-signifying gestures of feminine diagonals.

The Performance on January 14th will be followed by an artist talk.

On the performance days, the film installation PoLy-Mirrors by Alaa Alkurdi & Naïma Mazic can be seen in the foyer from 7:00 pm to 8:00 pm.

Naïma Mazic founded the more2rhythm association and the company n ï m in Austria in 2016. In 2018/19 she was choreographer in residence at K3 Tanzplan Hamburg/Kampnagel and has an MA in Performance Studies from NYU TISCH. She furthermore studied at P.A.R.T.S., the Reykjavik Academy of Arts, AHK Amsterdam and at the Vienna Academy of Music and Performing Arts/MUK. Naïma Mazic has been invited to the HipHop Continuum of Jacob’s Pillow Dance Festival USA and ImPulsTanz DanceWeb15. She dances for choreographer Talia De Vries, was a choreographic assistant to film-maker Athina Rachel Tsangari and choreographers Erna Ómarsdottir and Alix Eynaudi. In her work, Naïma Mazic focuses on the musical independence of dancers with different backgrounds and on the collaboration with jazz musicians. With n ï m company she performed, among others, in Havana, at CAB Brüssel, the Vienna Art Week / Kunstraum NÖ, Judson Church NYC, Leipziger Jazztage and many more.

A co-production of Naïma Mazic / n ï m company and imagetanz / brut Wien. With the kind support of the Department of Culture of the City of Vienna and the Federal Ministry for Art, Culture, Public Service and Sport., ACTOUT, ÖKF Berlin.