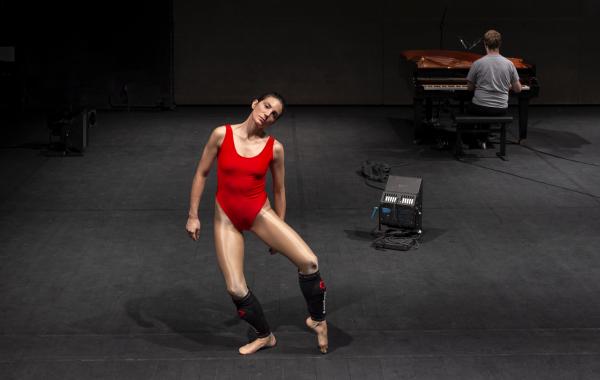 Lenio Kaklea was inspired to create this ‘duet with a pianist’ because music revolutionary John Cage composed pieces for the two African-American choreographers Syvilla Fort (1917–1975) and Pearl Primus (1919–1994) in the 1940s. Cage’s key work of avant-garde music, Sonatas and Interludes, was written between 1946 and 1948, a few years after he had created Bacchanale, his first work for prepared piano to a piece by Fort. In 1943, he composed Our Spring Will Come for Primus’ choreography of the same name. This is the story Lenio Kaklea wants to call to mind today: ‘herstory’ instead of ‘history’! The Greek-born choreographer vehemently insists on this and has created a delicately textured solo rich in detail. She herself dances – casually at times, angularly at others – in black motorcycle gear and in a red leotard, zooms in on herself via video, and includes the great pianist Orlando Bass as well as her own shadow in the performance. A decidedly convincing achievement of correcting historiography by means of dance.