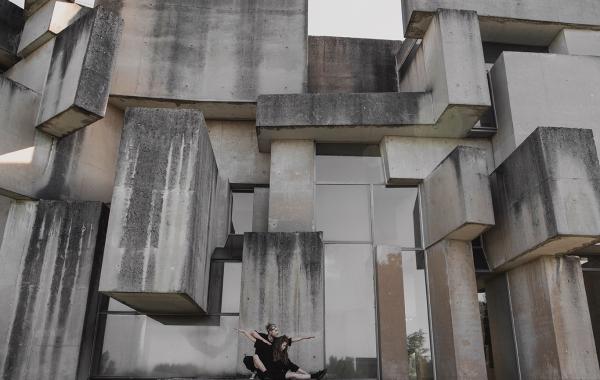 In BÉTON BRUT, the urban dance company Hungry Sharks combines aesthetics and principles of brutalist architecture with the social aspects and history of the street dance style breaking. The Hungry Sharks reveal a rich web of similarities between architecture and hip-hop culture, ranging from social aspects to the material of concrete that is used for building as well as an underground for dancing. In BÉTON BRUT, the intersection of both worlds becomes the driving force for the dance and choreography of a ‘brutalist physical theatre’.

The revolutionary movement of brutalism added new values, principles, and buildings to 1950s architecture; today, these are visible in cityscapes all around the globe. The Hungry Sharks have discovered a wide range of similarities between the histories of brutalism and the dance style called breaking – one of the four pillars of hip-hop culture. The social idea targeting poorer layers of society with an expressive aesthetic and many other similarities are the basis for this devised piece. All commonalities are generally organised around the essential element of ‘raw concrete’, which is both an important means of expression in brutalist architecture and a physical basis for the development of breaking.

The Hungry Sharks dance company was founded in 2011 by the choreographer Valentin Alfery and the producer Dušana Baltić. While their initial aim was to establish the movement vocabulary of urban dance styles in theatre, the company has since produced and internationally toured feature dance productions on a regular basis. Most recently, the Hungry Sharks showed their projects Hidden in Plain Sight (2016) and The Sky Above, the Mud Below (2018) at brut.

The Performance on January 28th will be followed by an artist talk.

Pressestimmen
"Hungry Sharks demonstrates why the urban dance company founded by Valentin Alfery (choreographer) and Dušana Baltić (producer) in 2011 was able to establish itself not only on "conventional" dance stages but also in the international theater scene." (Krone)

"Urban dance has [...] arrived with this company at a level where it is beginning to establish itself as an independent genre of contemporary dance." (European Cultural News)