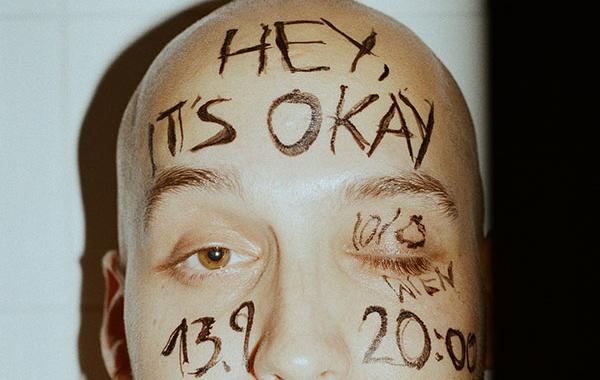 The first basic idea about Hey Okay was actually the thought that people, including me, have a problem with the finality. Besinders when it comes to loss. And also death, so always when something dies away. We are in an age when we all have computers, digital photography, painting also goes digital. You do not have to do any more riosking, you can save everything, you can go through all variations, I just realized, especially through painting, that's my basic thing, that you can not grow unless you kill something that the time has come to go or dying, one does not dare to go over, risk to destroy something. Something emerges, there comes the critical questioning of desse, dekonstukrition, transform ... rhythm ... it goes on and on ... evolutrioätrere nature .... to grow. Because standing in a circle, taking risks, critically examining the present nihct, sticking to obsolete structures means rest and standstill is death. And before all we are all the most afraid? Ultimately, it is so, no matter how abstract the world is, that we create ourselves, at some point death comes and one is caught up with it by nature .... although the ability of a person to think abstractly also corresponds to a naturalness. Only by the prevailing egoism, which is driven by market savvy, will this very thinking be used only for a small part, and not for the common good. It benefits only the top of the pyramid. Education actually means attracting individuals who are good at acting in general. And that problem is that the education is stopped, especially the education of the state is developed. The sheep are educated, nina closed .... that just then a thinking is promoted, reproduced, in order to further strengthen the market economy instead of weakening it. That is to say, an individual who thinks independently, and who does not become a plaything of domestic sects, as it is heralded, can not arise in such a system. This denekn does not exist. It is power-oriented and designed for effeciency and that should be blown up. The whole family will not be real. So Butler speaks of the intelligible matrix, so gestte, hold on to the people, but for which there is no evidence in the first place. And that strengthens this construct, and all of them suffer, especially minorities, because they are punished, who they do not actually perform. But those who are unaware of it, the poor, too, just do not know it or what it is like to break out of these norms. And out of Rouine, away from traditions ,. Everyone has this Inner Truth, which is covered by this representative's shield. And art is a means of releasing affects in men, tearing into the world of meaning. In order to qusolve an affect and through this affect, the representation shield is paralyzed and then the Inner Truth emerges. Okay, from a time in 1938, there was a trend in which abbreviations were misplaced. In the case it was Allen walker Read the OK OLL KORRECT has written. This acronym is a contradiction in terms. And that's where the circle starts, when it comes to structures and laws. Has ever invented someday somebody.