Heinz Frank. The Angle of the End Always Comes from Behind 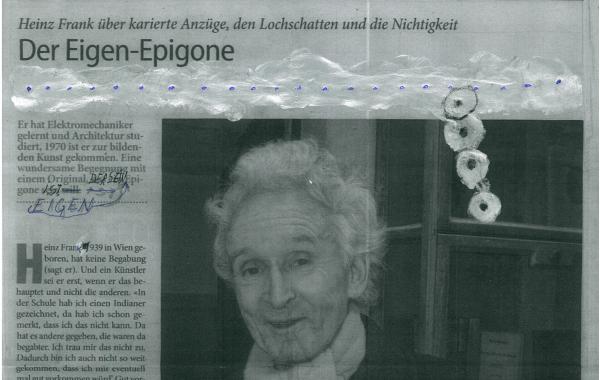 Trained as an electrical engineer and architect, Heinz Frank has been working hands-on as a sculptor, draftsman, painter, and creator of linguistic and object art, as well as occasionally, designer of interiors and furniture since the 1970s. Aphoristic notes such as “The hole is the epitome of emptiness” provide the initial sparks for a creative process resulting in pictures and constructions that not only blur boundaries between genres, techniques, and materials. More generally, the artist suspends norms and conventions—or to be more precise, he strips them of their power as agents of the disconnect between reason and emotion. That is why one of Frank’s guiding mottos is “Thinking what one feels and feeling what one thinks.” Enlivened by a dash of irony and with what appears to be playful ease, his formal-visual, intellectual, and material balancing acts, which often take inspiration from diverse cultural strands, recombine what society and tradition would keep strictly separate in manifold variations. Frank’s background in architecture is evident throughout: the measure of all things, of their proportions and relation to the space around them, remains the human being—and the artist himself.

Heinz Frank (b. Vienna, 1939) studied architecture with E. A. Plischke at the Academy of Fine Arts Vienna from 1965 until 1969. Since 1971, he has shown his work in numerous solo and group exhibitions at art institutions and galleries in Austria, Germany, Belgium, Turkey, Ukraine, and Switzerland.