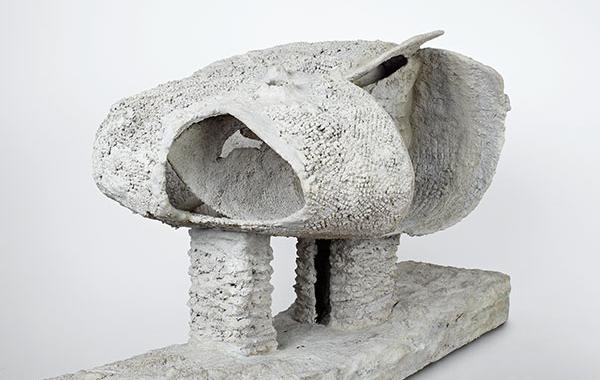 In January 2017 the collectors Gertraud and Dieter Bogner gave a very special gift to mumok—approximately thirty works by the Austrian-American architect, artist, stage designer, designer, and theorist Friedrich Kiesler. One of Kiesler’s major works, Endless House (1950), will now go on permanent show at mumok, along with a number of further works.
Endless House is a work that perfectly typifies the art and theory of Friedrich Kiesler. Its most conspicuous feature is the fact that space is continuously in flow. The body of this unusual architectural model is somehow spherical and yet irregular. The floor, walls and ceilings seem to be made of endless loops. Kiesler made only two full models of Endless House, one of which is held in the New York Whitney Museum.

Kiesler’s Vienna years and circle, with Otto Wagner, Josef Hoffmann, and Adolf Loos, and also the idea of the total work of art, were influential on his entire artistic and theoretical oeuvre. His vision of the relationship between artwork, space, and beholder gained form in his revolutionary exhibition designs and groups of works.