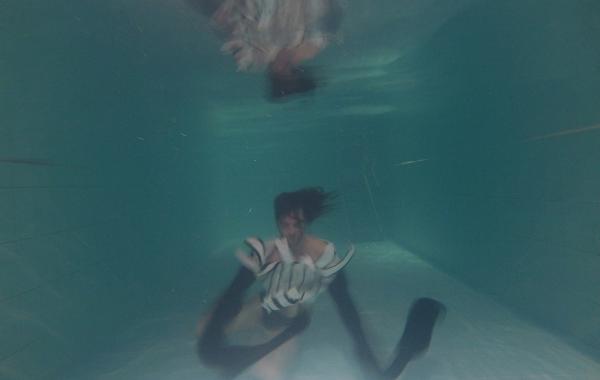 Wet dreaming at 52Hz guides us under the surface into an audio-visual ocean of whale intelligence. In his performance, Alex Franz Zehetbauer examines the complex emotional and auditory consciousness of whales and translates their ancient form of long-distance communication into the performance space. Submerged in a large tank, Alex composes live vocals in the form of sonic holograms that break at the audience’s feet in spiralic waves. wet dreaming at 52Hz confronts anthropocentric and patriarchal ideas of intelligence through the embodiment of a whale’s way of experiencing the world.

Whales have been around for a long time. Their brains have had more time to evolve than ours and this evolution has occurred in an environment with few natural predators. Perhaps, because of this, whale’s intelligence is focused on the complexities of interpersonal relationships, emotional honesty, free eroticism, serene playfulness and an agile entry into states we might call psychedelic.

Wet dreaming at 52Hz translates the science of the whale experience into the abstract. With this performance, Alex searches for what it would mean to have the mind of a whale or to perform in a room full of whale-minded people. How does it feel to perceive sound as a material entity? What would it be like if we could all see each others internal body state through sonar? And above all: What might the world look like if we were all a little more cetacean?

Alex Franz Zehetbauer (born 1990 in Brooklyn) is a performance and music artist currently based in Vienna. He studied vocal performance, dance, acting and composition at the Experimental Theater Wing at NYU Tisch School of the Arts and the International Theater Workshop in Amsterdam. His works have been shown in New York, Baltimore, Vienna, and Madalena, Azores. He is also trained in Aguahara and offers private sessions of this aquatic bodywork and movement practice. Alex’s work has been supported by Leimay CAVE, Arts Unfold, INK, and Arbeitsplatz Wien; he has been awarded the BKA Startstipendium für Musik und Darstellende Kunst (2018) and the TURBO Residency - ImPulsTanz 2018. At Brut, he was last seen on stage in Claire Lefèvre’s “Welcome to the Fisch-Haus” (2018).