Guided Tour Through the Best City in the World
June 6, 2016

George Bernard Shaw or, depending on your pop culture favorite, Nicole Richie, famously stated that “the best things in life are either immoral, illegal or fattening”. Tours such as “Why Vienna Is the Best City in the World to Live” prove that great exceptions to this rule do exist.

The two-and-a-half-hour walk guided by British urbanite Eugene Quinn helps you burn some extra calories and opens up debates on topics ranging from civic duty and social capital to urban planning and government policies. Previously some of Mr Quinn’s  unlicensed walks, such as “Vienna Ugly”, have met with resentment from the authorities, however nowadays he is encountering a more tolerant attitude from them. Thus, his tours can no longer be labelled as entirely illegal, making them the perfect pasttime for a sunny weekend. The walk is part of a conscious effort to get people more actively involved with their urban surroundings. Mr. Quinn manages a website called Space and Place, which offers a large range of urban “discovery trips”, including night walks and tours of smells around the city. 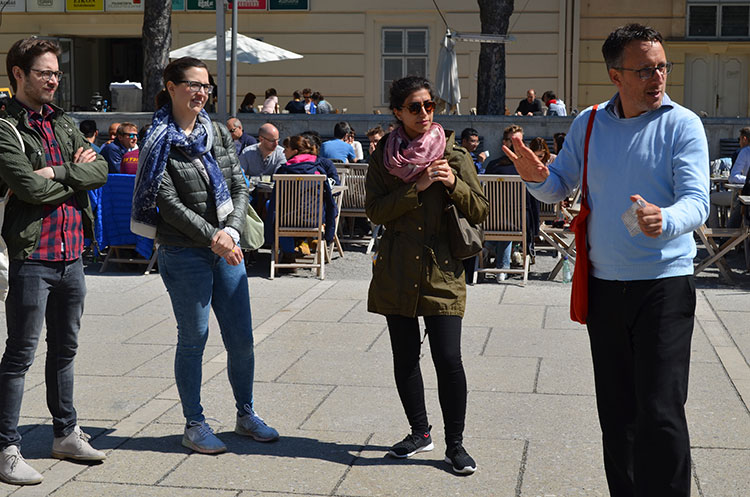 “With the walks I make (or urban explorations), I start with ideas or stories, and then look for buildings or spaces which allow me to tell the story, or communicate the idea. It is a back-to-front way of discovering Vienna,” explains the tour guide. It is also a gambler’s approach to creating tours, as it does not focus on the mainstream elements which have established the Austrian capital as the epicenter of classical music and tasteful architecture for decades. Instead, the tour dwells on alternative points of reference bridging the gap between old and contemporary Vienna.

Mr. Quinn celebrates the narrative potential of the famous, century-old Viennese coffee houses as markers of social capital. He also gives a nod to the resourcefulness of new-school cafés or “stress-free zones” where one can enjoy a good book and a cup of coffee for hours in a row. The equally unusual mix of new and old architecture opens up discussions of Vienna as adventurous, future-oriented and resourceful. Everything is neatly packed in a good deal of flânerie and lots of popular culture references. 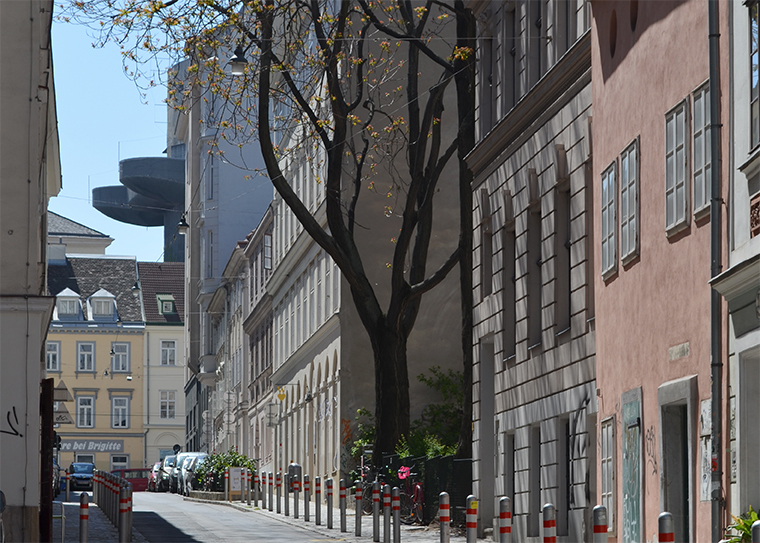 Mr. Quinn leads us through the less famous streets of an otherwise famous cluster of Viennese districts: Innere Stadt, Josefstadt, Neubau and Mariahilf. He explains this in an attempt to offer “insider details, so it would be interesting to locals as well as visitors.” And yet, despite the tour being open to anybody who wants to join regardless of their experience in or knowledge of Vienna, I had the distinct feeling that it resonated more deeply with locals, as it points out and celebrates small things around the city which usually get taken for granted.

The tour is, in a sense, a very civic one as it advocates a healthy and realistic assessment of life in the city based on visible quality markers: outstanding drinking water, low crime rate, excellent public transport and good recreational facilities. Mr. Quinn praises the fact that life here is affordable even for the poor. Reasonably priced childcare, free education, as well as countless art, cultural and entertainment venues make it a haven for people from very diverse personal and professional backgrounds. The city itself is inviting and very clean compared to other European and international capitals, boasting urban gardening spots and bike paths for environmentally-friendly urban experiences. It is not unusual to find that Vienna ranks first among the cities with the best quality of life (Mercer Consulting survey, 2016). 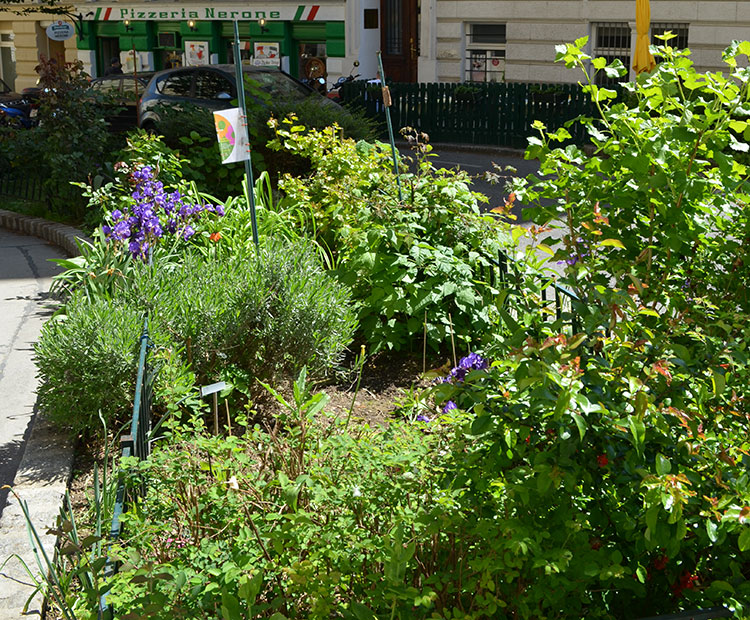 But this tour is not about listing an inventory of things that make Vienna special, nor is it a rebound tour for people who have fallen out of love with their own city, It is also not a therapeutic two-and-a-half-hour walk for depressed urbanists. Instead, this 10 year Vienna based expat offers tours with more than just a local’s point of view, choosing to sprinkle the tour with personal anecdotes and details, making the experience all the more authentic and relatable. Beyond the plethora of facts that make Vienna stand out and beyond the fun factor in (re)discovering the city, the “Why Vienna Is the Best City in the World to Live” tour is an organic and very poetic way of interacting with the city streets and places it has to offer.

If you want to join the tour, check for dates in our calendar.

I found your blog using msn. This is a very well written article.Thank you for sharing that excellent subject material on your web site. I noticed it on the search engines. I will check back again after you post much more articles. Visit it! to get more information >>>>>> Write my Essay

A French group has been taking a shot at one of the Wadi Farasa tricliniums for a few seasons now. I haven't seen what they turned up on last season's burrow, so I'll have to jab around there for some time. assignment writing service. They're gaining extraordinary ground building up the likely engineering which once graced the patio of the complex.

It would be such fun filled moment to go across city and visit the beautiful places and city I always felt like going places I never thought about things going bad now I think things will be back to normality and coming few days it will be a perfect and spot on thing to witness in mean time thou.As Academic Paper Writing Service have spotted on this particular site.

Stir your faculties. Get the imperial treatment on one of these Royal London touring visits or extinguish your thirst by wine sampling on a Tuscany visit.

Stir your faculties. Get the imperial treatment on one of these Royal London touring visits or extinguish your thirst by wine sampling on a Tuscany visit. If you want assignment writing visit here | http://www.assignmentbay.co.uk