Fresh Off the Market: ON Market 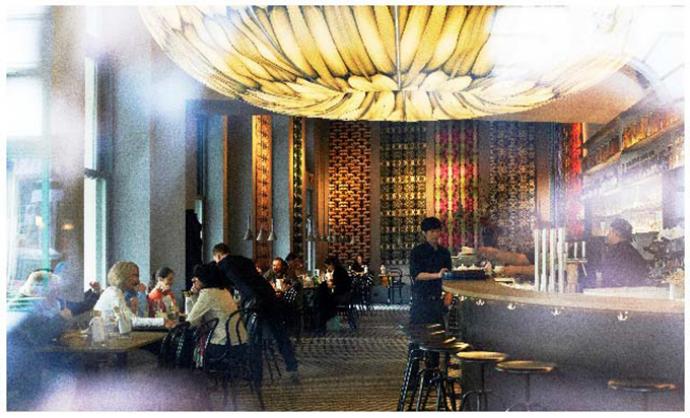 The evolution of Asian food has been slow in Vienna. Even now, going for Asian in this city typically involves some kind of “pan-Asian” buffet with weak simulations of familiar Chinese/Japanese/Thai dishes: miso soup, egg rolls, day-old makis, and a host of flavorless batter-fried items that could be interchanged as appetizers or desserts. Many unknowing Austrians embrace these establishments as a “healthy” alternative to heavy local fare.

Those of us who hail from a more international background know better, and slowly but surely, Vienna is starting to come up to speed in the Far Eastern cuisine scene, thanks to its growing multicultural population. One of the pioneers of the new Asian culinary movement in Vienna is Simon Xie Wong, who opened his first highly successful restaurant ON in 1993 and ChinaBar in 2011. He has recently upped the ante with ON Market, located adjacent to the southwestern end of the Naschmarkt on the Linke Wienzeile.

Wong and his menu originate from the port city of Wenzhou on the southeastern coast of China, known for its international flair and seafood-inspired dishes. The emphasis at ON Market is on authentic ingredients and dynamic riffs on his hometown influence which incorporate local Austrian specialties—a recent menu (which changes on a biweekly basis) included a kimchi-porcini mushroom-rice dish and a Szechuan fish entrée featuring sauerkraut. Numerous dim-sum-type offerings served in bamboo steamers and unfailing fresh sushi sets are ON staples.

Hidden away on a quiet street in the 5th district, Wong’s first restaurant offered the cozy familiarity of a Wiener Beißl. A completely different approach was taken with the new location—the former bank branch was completely gutted in order to create an expansive, welcoming space that opens out onto the lively street, thereby forging a synergy with the market environs. The goal of the project’s architect, Birgit Eschenlor, was to “form a dialogue between the kitchen, the city, and the people.”

The outdoor seating area in front of the restaurant, or Schanigarten—a popular feature in Vienna—completes the seamless transition from interior to exterior. Lined with lovely, fragrant peach trees bearing real fruit and feeding off the vibrant energy of the neighboring Naschmarkt, it was recently honored as the best Schanigarten in Vienna by the Austrian Chamber of Commerce.

If you miss out the outdoor experience before the colder months set in, don’t despair—the restaurant, which is open virtually round-the-clock anyway, will soon be supplemented by an exclusive, 1920s-Shanghai-style club downstairs, due to open in the fall season.