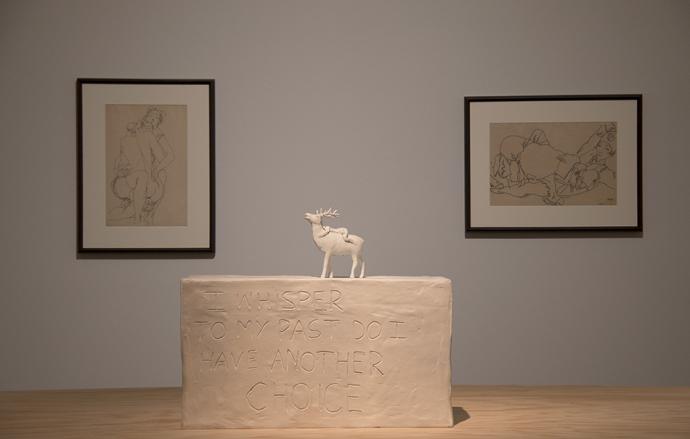 In April this year a first comprehensive show of the works by Tracy Emin, one of the leading figures of the “Young British Artists,” opened at the Leopold Museum. Emin, whose work was greatly influenced by masters of modernism, selected pieces by Egon Schiele from museum’s collection to enter into a conversation with her artworks on show. We asked Diethard Leopold, one of the curators of the exhibition, about the emergent artistic dialog between the modern and contemporary art.

How did the idea of this exhibition come about? This is the first solo show of this magnitude for Tracy Emin in Vienna, why now?

Diethard Leopold: My first encounter with Tracey Emin's art was at the Venice Biennale in 2007. I was particularly struck by the lightly rising columns of driftwood, as well as her sensitive way of drawing and painting. That's when my interest woke up. I lost track of her though for awhile until I saw her work again at the White Cube London, about 2 or 3 years ago. Again, I was struck by her light and sensitive hand. Simultaneously, the Leopold Museum was ready for an experimental journey into Contemporary Art after the initial Schiele-Contemporary dialogue of my 2011 exhibition "Melancholy and Provocation”. That also included 5 living artists while there was another curator for Rudolf Schwarzkogler.

Was it part of the initial concept that Ms. Emin would incorporate the works of Egon Schiele into her show?

DL: We met Tracey about 2 years ago in London, and our mutual understanding right from the start was to incorporate some Schieles, but on a minimalist scale - not a boring 50:50 match, but sudden and intense flashes of an imaginative dialogue. We understood this point from the start without having to discuss this at length.

What artistic links do you see between contemporary English female artist and an Austrian expressionist Egon Schiele? Are there any personal links?

DL: There is a personal link in Tracey days at Margate, when she was quite young and encountered Schiele as a very different artist - different from Andy Warhol for example - a kindred spirit who took life & work seriously. I think this is the most obvious link: taking one's own life absolutely seriously and turning it into material for one's art production. On a deeper level both share an interest for the spiritual, or let's say: a need for the spiritual, but - third link - through the experience of one's body and one's emotions.

DL: Karol Winiarczyk, the curator, was in close contact with Tracey and the Emin studio through all the many months of preparing the show. He knows her work intimately, and developed the concept for the show, and discussed the concept steadily with her. It was foremost he, Tracey and the studio in London, who made the choices of her works.
With Schiele, I did a pre-selection, mostly of our private collection, and Tracey chose from these the most appropriate ones. She felt that there was still something missing and so the museum in Vienna offered her some more works on paper. About one third of the Schieles come from this source now.

What, in your opinion, did Tracey Emin want to communicate with this exhibition?

DL: Tracey Emin wanted to show how contemporary and alive this artist of one hundred years ago still is. Therefore, she hung the Schieles not in a row, not as an example of a culture and civilization and an aesthetic long past, but in single, strong examples, which shine in and of themselves as if they were painted or drawn just yesterday. That's why she said, she wanted Schiele to escape this narrow, definite world of Austria, in ”Vienna 1900", and enter the present and international. His works, she said, need space - and here they have space enough to be seen in a new way - which in a way is the absence of context. Or of the usual context in which they are seen in our museums.

What pieces can we expect to see?

DL: Apart from one small Schiele oil, more than a dozen drawings and watercolours and also two poems written by Schiele himself, you can see Tracey's artistic hand in various different medias, which is fascinating: a large metal and timber installation, the roller coaster "It's Not the Way I Want to Die"; a DVD projection of mono-prints; gouaches on paper; bronzes, large and small, voluminous and as reliefs, with and without white patina; acrylic paintings on board; acrylic on canvas; two neons, and marvellous embroideries, embroidered calico.The existential themes brought forth, in my personal view are fear and excitement, sex and loneliness, feeling one's existence through one's body, longing and the search for beauty, sadness, and holding still.

What are your personal favourites in the show?

DL: Maybe the embroideries. When you look at them from afar, they seem to be ink-brush painting, done with very large and also small and fine brushes - a playful and balanced distribution of white spaces and black blotches, lines, drops and surfaces on canvas. Almost like abstract painting. And then the surprise when you put your nose very near, when you see, that all this "brushwork" is in fact stitched!
The same ambivalence is in the theme of these works: from afar it's a sexual act; from a middle ground it's loneliness and even sadness in the midst of an encounter; and from very near it is intense emotion. Again, that’s my personal view. Other people will experience different emotions. We put a small, naked, seemingly abandoned, shocked and simultaneously very curious little Schiele girl, her genital unconsciously visible, next to these four large embroideries. This combination is breath taking. Some feel quite uncomfortable in this room. There are all kinds of vibrations in this artist's dialogue. Pleasant ones, unpleasant ones. You decide. You are awake in this moment. This is what art stands for. 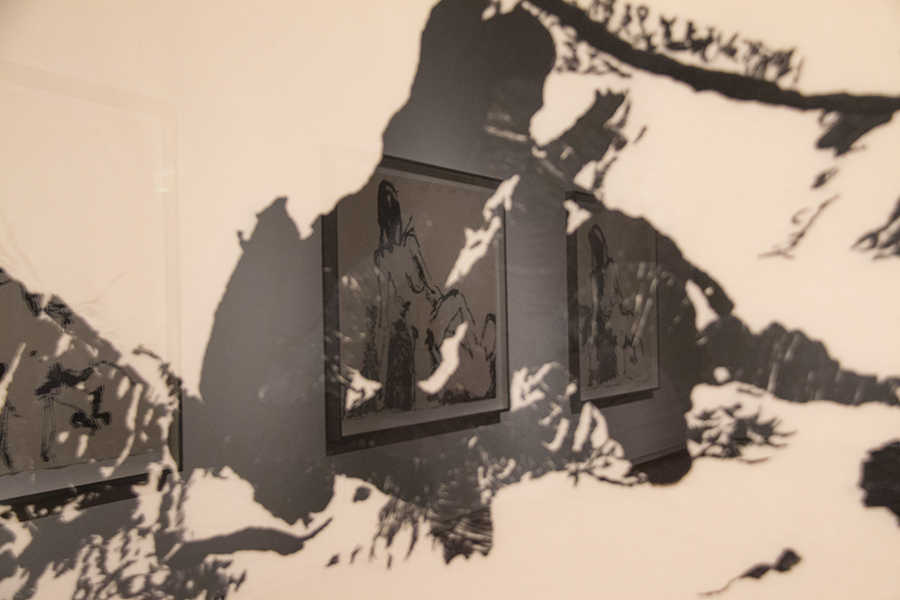 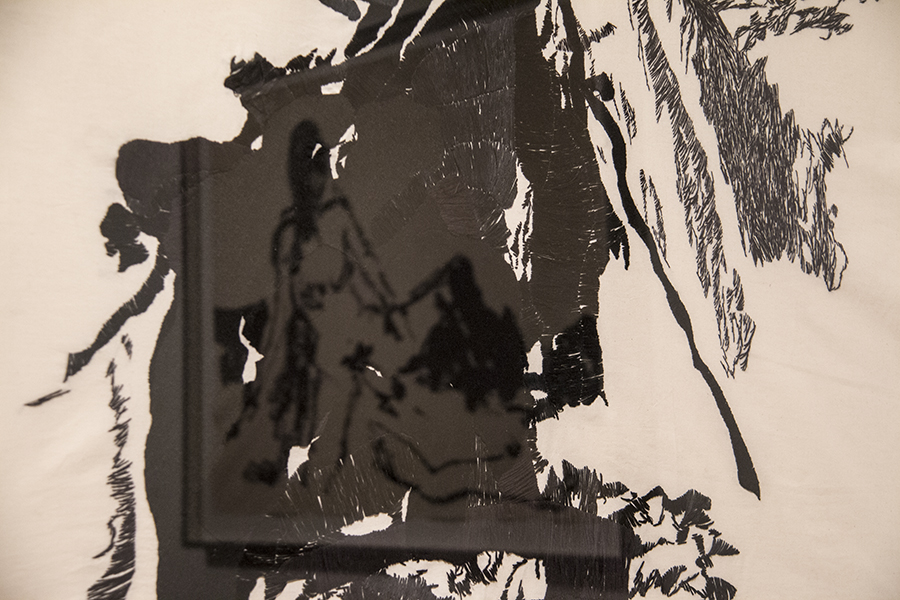 What was the biggest challenge for you as curators to realise this exhibition?

DL: To not forget, that what's most important is not visible. It appears through this visible dialogue, to be sure, but the focal point is the two artist's intentions, where they meet and where they are different. And not to hide this invisible point, paradoxically put. That's why there is also lots of space between the works in our presentation.

What is the public response to this exhibition?

DL: Most people who visit the exhibition are truly exited both by the exhibited works of art as by the way they are presented. But some people don't understand our exhibition, because there is the usual avoidance of deep emotions. And so the public response was unanimously positive and excited, however sometimes far off the mark. There were even quite a few art journalists who talked with Tracey about all kinds of things - topics deriving from superficial images, deriving from Tracey's public past - which had nothing to do with the exhibition. That was quite hilarious - and sad at the same time. So in general it is a very good response!

You mention that some people do not understand the exhibition. I gather there are lots of emotions that these pieces evoke, but they don’t "go down" well in Vienna, as people are not too comfortable either showing nor having strong emotions in public. You do not seem to be surprised about it; although the reception is good people still don't understand… That would imply that there was a certain intention behind the curatorial work. What was it?

DL: The concept is not sexual provocation or provocation by any kind of autobiographical pouring-out of information pertaining to one's private life, as so many wrote about. The concept was based on the intention to communicate basic human states of being in an artistic way.
All together 9 different rooms evolve into 9 affective spaces - "affective" – or effective! - being another word for magical -, where a definite existential disposition is evoked and explored by two artists, Schiele and Emin.
Our intention was to show, how these two different artists - of different gender and of different times, who nevertheless share the same starting point - found forms and mediums to evoke such basics.

Let us know what you think, what were your impressions from the show, how did you like the the combination of the works by these two artists.